How do you take a personality and international legacy as outsized as that of Dr. Norman Bethune and 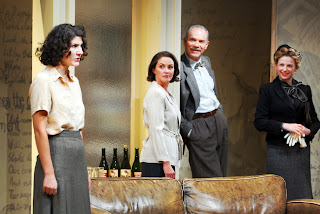 put it into the confines of a stage? Playwright/ director Ken Gass, (also Artistic Director of Factory Theatre and a recent recipient of the 2010 Premier's Award for Excellence in the Arts,) has distilled it ingeniously into a six month period that takes place in Montréal in 1936, just before Bethune left for Spain to help in the fight against Franco and the Fascists. He was already something of a legend in Montréal, as much for his fights with hospital staff and the medical establishment over socializing medicine and treating the poor as for his multiple romantic partners. The play focuses on his 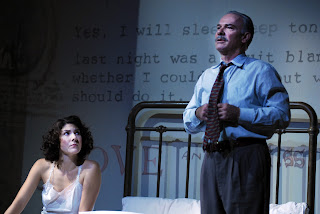 relationships with three of women in his life - Marian Dale Scott, a married painter, Margaret Day, a university student and campus activist, and his twice ex wife Frances Penny.

Ron White does a credible job of "imagining" the iconic physician who's still revered in China for his work with the People's Liberation Army. (He died there in 1939 after contracting blood poisoning from performing battelfield surgery.) He's a restless spirit who's simply unable to toe the line and say black when he sees white, brilliant and driven and quite charismatic. He also drinks too much, and is the kind of bastard who will sleep with two women at the same time and expect them to be nice about it. "If I drink, it's to keep myself sane," he says. 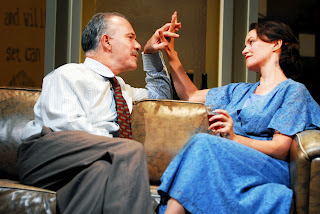 Ron as Bethune embodies that mercurial spirit, the one who will rant and rave with genuine passion against injustices occurring halfway around the world; the kind of guy you'd believe would wake up in the middle of the night and decide to head for Spanish battlefields.

The script strikes a nice balance between talking politics (necessary in this case!) and telling a story that moves along, and framing it via his messy affairs of the heart brings a lot of depth to the portrait. The ladies come across as individuals in their own right, and bring his politics into the personal realm. You can see why they would bother with this impossible, admirable man. Bethune's passionate and poetic political writings also add to the persona - the eternal rebel, prickly and uncompromising, but possessed of a devastating charm. 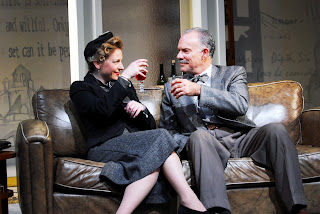 I tend to judge dramatic works by whether or not they kept me wanting to see more, to see how the story ends, and here, even though I already knew the facts of his life, Bethune Imagined delivered an engrossing story.