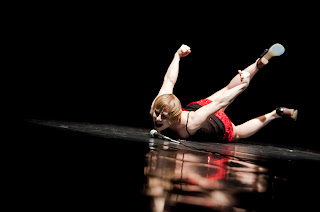 of that universal human concern. The first part is a solo piece for Sasha Ivanochko as a torch singer about to go on stage. We see her inner turmoil as she sings (and tries to sing) about love in agitated movements, laden with romantic angst. There are snippets of songs and inane stage patter, rendered ironic by her frantic and anguished choreography.

Sasha is a wonderfully expressive dancer, right down to her fingernails, embodying the highs and lows of love in very dramatic and theatrical style. The set is simple, with only a brick wall facade at the back and a microphone enhanced by imaginative lighting, and the soundtrack is sometimes music, sometimes ambient street noises, sometimes silence, with only her heated breathing to punctuate it. 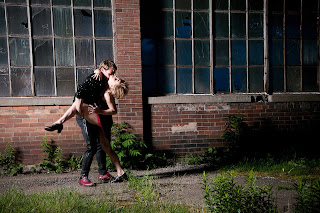 In the second half, she's joined by Dora Award winning dancer Brendan Wyatt. Is it the relationship remembered - a kind of "before" to the first half? Is it a reconciliation? A fantasy? Whatever it's placement in the "story", it's the diary of a dysfunctional relationship, full of passion, sensuality and uncertainty, one minute bound together and the next defiantly apart. It's a seamless blend of movement, theatrical elements, spoken word and song, the needy naked emotions shamelessly expressed.

It must be quite an exhausting piece to perform, with kudos to both dancers for a stellar performance. It's definitely worth checking out. Continues tonight and tomorrow.
brendan wyatt contemporary dance dance theatre danceworks harbourfront sasha ivanochko toronto dance scene