London River begins where it ends - with Brenda Blethyn's Elisabeth - mother of Janet - working the fertile fields of her Guernsey farm, and Sotigui Kouyaté as Ousmane, a woodsman - estranged father of Ali - 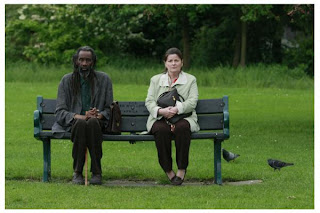 rivaling the trees of the forest as he glides among them in France. In between, the two of them come from different worlds to realize that maybe they're not so different after all.

The story itself begins in July of 2005, with the suicide bombings that blasted the London subway and a bus in rush hour. Elisabeth calls her daughter but can't reach her, and in the ensuing days, a growing sense of urgency pushes her to leave the bucolic island and head to London to find her. She's startled to discover that her Jane is living in an apartment above a Halal grocer's in a gritty part of London - certainly not the worst, but has certainly seen better times. She finds a man's razor and a kora in her apartment.

Ousmane has been living in France, separated from his wife and son in Africa for six years when he gets the phone call from her, frantic that she hasn't been able to get hold of Ali. She dispatches him to London to find out what has happened. With Elisabeth going through the conventional channels and Ousmane reaching out 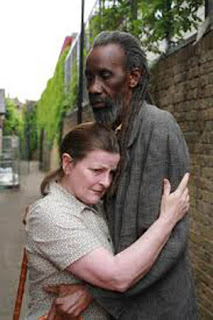 through a local mosque, their paths gradually begin to cross. Elisabeth puts up posters with Janet's picture, and Ousmane recognizes her from a shot taken with his son - at an Arabic class. Jumping to the worst sort of conclusions when Ousmane approaches her, Elisabeth calls the police.

Elisabeth's hostility and suspicion are immediate, even to panic. "This place is crawling with Muslims!" she cries over the phone to her brother. Later, she demands of the Arabic class teacher incredulously, "I mean, who speaks Arabic?" What ensues is not the tautly crafted thriller or suspense story you might be expecting based on the description. Instead, it's a humane and thoughtful character study of two people in trying times.

The film combines a poetic vision with its mundane setting and realities. Cinematographer Jérôme Alméras has framed virtually every shot with an artistic eye even as the film examines the dismal grind of those looking for the wounded, and perhaps dead - the grim procession of morgues, of checking hospital lists, of watching newscasts with breathless attention. The acting is very naturalistic, taking the two from a prickly beginning to a friendship and understanding through the ordeal.

Physically, they make a striking couple - the tall and willowy Malian Sotigui (who won a Silver Bear at the Berlinale Filmfestival for this role - and sadly passed away this past spring,) and comfortably rounded and very British Brenda illustrating a dichotomy that, in the end, is much less than it seems.