Continues at the Cameron House for a limited run
You can check out a couple of scenes on video here.

It's the spring of 1914 when Canadians get word that war has broken out in Europe. As a nation less than 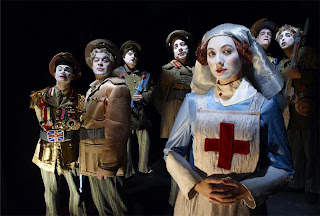 four decades old, the colonials sign up in droves to defend Mother England. Sir Robert Borden is Prime Minister, and the Duke of Connaught - Queen Victoria's son - is the Governor General. Michael Hollingworth's retelling of the ensuing conflict, carnage and confusion is both highly entertaining and instructive, lit up by Videocabaret's unique theatrical sensibilities. 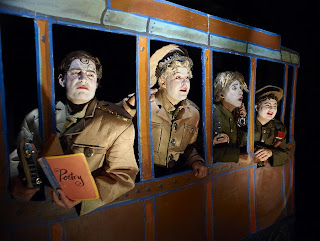 The play unfolds in a series of very short scenes that flesh out the story from the point of view of politicians, leaders, and the hapless soldiers who went to their grisly deaths in droves. The theatre space is blacked out, using intense and targeted spotlights on a small, black stage. The actors sport white faces and elaborate, colourful costumes and wigs, giving the piece a cartoonish quality that entirely suits the story - one about the colossal stupidity and greed of the ruling classes and the unnecessary sacrifices of the masses.

It's a story about incompetent leadership, the Brits who were only interested in glory and symbolic victories and saw the Canadians as cannon fodder. Their first CO had them building tennis courts for his amusement in France, and attacking machine guns. The slapstick moments brought laughs, even as the play quite effectively conveyed the stories of individual soldiers, their descent into misery and madness, the chaos of battle and the kind of unthinking brutality that people can be capable of under desperate conditions. 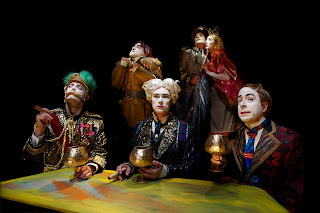 The Great War also lights up Canadian history in a way that your grade school textbooks never could. Among the tidbits I learned:
The Cameron House provides a congemial back of the bar ambience, its ceiling festooned with faux flowers and vines, and the production was bolseterd by precision like lighting and sound effects/music. 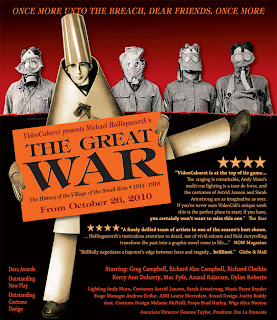 War is always a story about the profiteering of the few for the mistery of the many, and the play points out that the Great War to End All Wars was pivotal in the making of Canada as a nation. By its end, even English speaking loyalists were fed up by the sheer ungrateful arrogance of the Brits and their demands for more troops, resulting in Conscription, an extremely unpopular move. There were 59,000 casualties from a force of 500,000 sent over, and another 120,000 wounded.