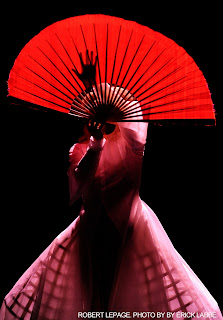 will have a rare opportunity to see him on stage when the Sony Centre presents Eonnagata, a Sadler’s Wells London production in association with Ex Machina and Sylvie Guillem, on November 18 and 19, 2010.  Created and performed by Robert Lepage, internationally acclaimed French dancer Sylvie Guillem and award-winning British choreographer Russell Maliphant, this remarkable theatrical production from London’s acclaimed Sadler’s Wells first premiered in 2009 and has since toured France, Spain, Germany and Singapore.

Eonnagata tells the story of Charles de Beaumont, Chevalier d’Éon, an 18th -century French diplomat, soldier, and spy.  Daring and unconventional, de Beaumont is believed to be the first spy to use cross-dressing in order to successfully carry out his missions and, until the day he died, his true gender was a source of constant speculation.  Drawing on the onnagata of Japanese Kabuki theatre in which male actors play female roles, Eonnagata melds dance and theatre to probe the mystery of gender and human nature. 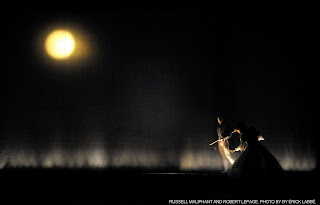 The nonconformism of Charles de Beaumont struck a chord with the creators of Eonnagata which features lighting by Michael Hulls, spectacular costumes by the late fashion designer Alexander McQueen, and sound design by Jean-Sébastien Côté.

Ex Machina was founded in 1994 by Robert Lepage as a multidisciplinary company bringing together actors, writers, set designers, technicians, opera singers, puppeteers, computer graphic designers, video artists, contortionists and musicians.  The creative team believes that the performing arts (dance, opera, and music) should be mixed with recorded arts (filmmaking, video art and multimedia). Ex Machina strives to serve as a laboratory and incubator for a form of theatre that will reach and touch audiences.  Ex Machina is funded by the Canada Council for the Arts, Quebec's Arts and Literature Council and the City of Quebec. 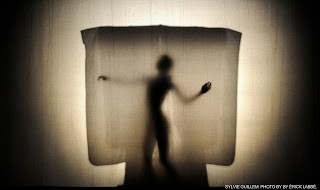 Eonnagata runs at the Sony Centre For The Performing Arts (1 Front Street East, Toronto) for two perform- ances only Thursday, November 18 and Friday, November 19, 2010 at 8 pm.

Tickets are available by calling 416-872-2262 or in person at the Sony Centre For The Performing Arts Box Office (1 Front Street East, Toronto).
Get tickets online here.