on November 24, 2010
From a media release - alternatives to holiday commercialism at the RCM:

AVOID STRESSMAS AT THE ROYAL CONSERVATORY 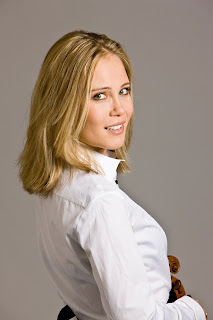 The Royal Conservatory offers the perfect antidote to the busy holiday season in December, with a variety of concerts in its three beautiful venues: Koerner Hall, Mazzoleni Concert Hall in historic Ihnatowycz Hall, and Conservatory Theatre. International and Canadian artists, as well as the Conservatory’s very own students, take the edge off Christmas stress, and holiday shopping is made extra easy by purchasing The Royal Conservatory Gift Cards, available in any denomination.

The first of the Koerner Hall concerts, on December 10, features virtuoso Canadian violinist Leila Josefowicz. (pictured above) Known for being a strong advocate of new music, she plays Conversio, a minimalist piece by Erkki-Sven Tüür, one of the leading composers from the Baltic states, as well as better known works by Brahms (Scherzo in C Minor for Violin and Piano (Sonatensatz), WoO 2), Shostakovich (Sonata for Violin and Piano, Op. 13), Stravinsky (Duo concertant), and Schubert (Rondo for Violin and Piano in B Minor, D. 895, Op. 70 “Rondeau brilliant”). Prior to her concert in the evening, Ms. Josefowicz conducts a master class for The Royal Conservatory’s Glenn Gould School students. The other virtuoso, who is returning to Koerner Hall on December 12 after making her debut with Absolute Ensemble during the 2009.10 inaugural season, is the American pianist Simone Dinnerstein. As part of the Invesco Trimark Piano Series, she demonstrates why her recording of Bach’s Goldberg Variations made her a superstar. Ms. Dinnerstein will perform the 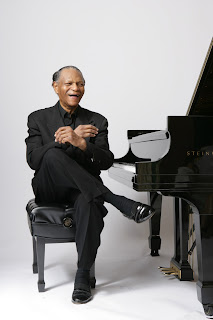 Variations, a piece for which the Conservatory’s most famous graduate – Glenn Gould – was renowned, on Koerner Hall’s wonderful Hamburg Steinway.

Aspects of Oscar series continues with Oscar Solo on December 11 featuring two powerhouse pianists, McCoy Tyner and Alfredo Rodríguez, as they celebrate the legacy of the great Oscar Peterson. Mr. Tyner, who rose to fame as John Coltrane’s first chair pianist, is joined by the young rising Cuban star, Mr. Rodríguez, discovered and recorded by music producer Quincy Jones. Mr. Rodríguez has played to capacity crowds at major U.S. jazz festivals and, most recently, he and Mr. Jones co-wrote Better City, Better Life, which was chosen to be the official theme song of the 2010 Shanghai World Expo. (McCoy Tyner - photo by John Abbott)

A number of student performances take place in Mazzoleni Concert Hall as part of the Discovery Series: The Glenn Gould School Opera division presents An Evening of Kurt Weill, comprised of cabaret favourites and Weill's Mahagonny Songspiel for two nights on December 3 and December 4; New Music Ensemble of The Glenn Gould School performs cutting-edge contemporary music on December 9; and senior string students from the Young Artists Performance Academy of The Royal Conservatory come together as members of the Academy Symphony Orchestra on December 12.

On December 4, the casual and comfortable Conservatory Theatre is once again livened up by Bluebird North, a musical showcase that brings together some of Canada's most inspiring songwriters to share their songs and stories round-robin style.

December events at The Royal Conservatory:

Tickets are available online at www.rcmusic.ca, by calling 416.408.0208,
or in person at the Weston Family Box Office

A limited number of $10 rush tickets are available 90 minutes before all performances presented by The Royal Conservatory.