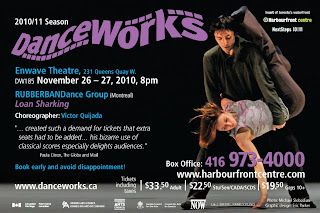 Loan Sharking runs November 26-27 at Harbourfront Centre's Enwave Theatre and offers a wide perspective on the many lyrical and physical possibilities of the particular vocabulary developed by RBDG - a contemporary style that blends the spontaneity and exuberance of hip hop culture with the refinement of classical dance.

Quijada creates a groundbreaking movement aesthetic with his singular choreographic language inspired by b-boying, ballet and contemporary dance. In Loan Sharking, street-smart works for six dancers fuse theatricality, athleticism and grace with a healthy dose of humour in pieces that pop and sizzle onstage in a catalogue of works highlighting different moments of the company's existence.

The first act features Dr Ib Erif, a group work created in 2008 that reignites the fire in Stravinsky's Firebird (the title spells Firebird backwards), originally done as part of a televised event in collaboration with the Orchestre symphonique de Montreal; Soft Watching the first implosion, an all-male trio created in 2005 for Peter Boal & Company to Vivaldi featuring dancers from New York City Ballet;
Attempt #2 at Reinventing the Hip Hop Routine, an all-female trio created in 2002 for RBDG and premiered at the New York Central Park Summerstage Festival. 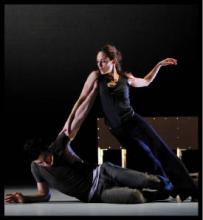 Critics have raved about Loan Sharking, premiered and toured in 2009:

"Like a brilliant mad scientist of dance, Victor Quijada has mixed forms and styles and emerged with a gorgeous hybrid of hip-hop, contemporary dance and ballet that transcends its parts and become something entirely new."
- Tresca Weinstein, Times Union, Albany, New York

Victor Quijada founded RUBBERBANDance Group to create an exploratory base where he could mix his several influences to create a new concept of dance: a contemporary style that would blend the spontaneity and exuberance of hip hop with the refinement of classical dance. Also led by co-artistic director Anne Plamondon, RBDG is in the forefront of Montreal's contemporary dance scene and recognized internationally for its new and unique vision of contemporary dance theatre. RBDG literally exploded onto the Montreal scene in 2002 with its singular artistic blend of ballet, contemporary dance and breakdancing. RBDG work is rich in its exploration of human relationships, concentrating primarily on psychological constructs, behavioural patterns, and emotional conflicts. Beating with the fresh pulse of street demeanour and an acute understanding of theatrical staging, Quijada's choreographies harness the ardour of violence, tenderness, comedy and tragedy - along with a great deal of honesty and courage - to narrow in on the larger goal of revealing a truth about the human condition; a truth that might somehow make a difference to someone in the audience.