Award Winning Production of Assassins back in Toronto January 6

on December 19, 2010
**Hot off the presses as of January 13:**
The play's run has been extended! It will be on hiatus from January 24 to 31 to accommodate another production at The Theatre Centre, but comes back February 1 for an additional 2 week run, ending February 13.

For Immediate Release
December 9, 2010. Toronto, ON... Birdland Theatre with Talk Is Free Theatre is thrilled to announce the cast for the remount of the 2010 Dora Award winning production of Assassins. Returning to The Theatre

Centre from January 6th to 23rd, 2011, tickets for Sondheim’s killer musical are on sale now through Arts Box Office by phone at 416-504-7529 or online at www.artsboxoffice.ca.

Lisa Horner will be playing the role of self-styled radical Sara Jane Moore. Recently she has been seen in Love, Loss and What I Wore and as Claire in My Mother’s Lesbian Jewish Wiccan Wedding. Horne has previously spent five seasons with the Shaw Festival and two seasons the Stratford Shakespeare Festival.

Janet Porter will be taking on the role of Lynette “Squeaky Fromme”, after having most recently been seen in Actors Repertory Company’s production of The City and Birdland Theatre’s SoulSeek. Other stage credits include Orson’s Shadow (Pilot Group), The Swearing Jar (6am Tango/Toronto Fringe), and The Last Days of Judas Iscariot (Birdland Theatre).

Taking over the role of Zangara is Kevin Dennis. Most recently he has been as Snail in A Year With Frog and Toad (LKTYP), Benvolio in Romeo and Juliet (Neptune Theatre) and Act Now! (Toronto Fringe). Dennis has also been seen in Snow White and The Group of Seven (Ross Petty Profuctions); Hair and The Beard Avon (Canadian Stage); and three seasons at the Shaw Festival, to name a few. 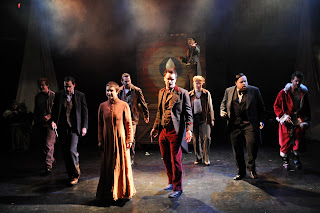 Whitney Ross Barris, who will be playing Emma Goldman, is an actor and jazz singer who has performed across Canada, the US and in Europe. She has appeared in the Dora-nominated Gorey Story, Woyzeck, and the world premiere of Hungry.

Playing Czolgosz will be Alex Fiddes who was recently involved in One Step Forward, a new musical by Leslie Arden and Tim French for Talk Is Free Theatre. He played Gary in Why We Tortured Him (Hammer Theatre) and for the past two years he has appeared in the Toronto Fringe (Icarus Redux and The Last Buffalo).

Part vaudeville extravaganza, part exposé, and wholly electrifying, Assassins is a dark and controversial Tony Award-winning musical about the American dream gone awry. This wickedly comic one-act historical “revusical” lays bare the lives of nine individuals who assassinated, or tried to assassinate, various presidents of the United States. From John Wilkes Booth to Lee Harvey Oswald, Sondheim and Weidman bend the rules of time and space, taking us on a nightmarish rollercoaster ride in which assassins and would-be assassins from different historical periods meet, interact and in an intense final scene inspire each other to harrowing acts all in the name of the American Dream.


Birdland Theatre is a Toronto-based theatre company founded in 2004 by Artistic Director Zorana Kydd. Committed to ensemble collaboration through its work with guest artists, sponsors and the community, Birdland Theatre aims to promote the art of live theatre through dynamic productions, intensive actor training and outreach programs.