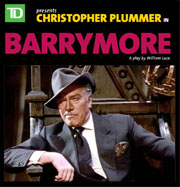 Having premiered at Canada's Stratford Festival in September 1996, BARRYMORE subsequently toured several US cities, and opened at Broadway's Music Box Theatre in March 1997.  For his indelible portrayal, Plummer won the 1997 Tony Award for Best Performance by a Leading Actor in a Play.  He also won the Drama Desk Award, the Edwin Booth Award and Outer Critics Circle Award for Best Actor in a Play.

One of the world's most distinguished classical stage and film stars, Christopher Plummer has also been hailed as the finest Shakespearean actor to emerge from North America in the 20th Century.  Last season, he starred to critical acclaim  as Prospero in Des McAnuff’s production of Shakespeare's "The Tempest" at Canada's Stratford Festival, and his newest motion picture, "Beginners," co-starring Ewan McGregor, was selected as a special presentation at the 2010 Toronto International Film Festival. 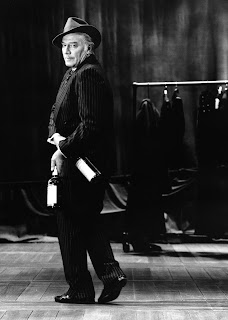 The entire original creative team of BARRYMORE will be reunited for the Toronto presentation including three-time Tony Award-winning director, GENE SAKS, scenic and costume designer SANTO LOQUASTO, and lighting designer NATASHA KATZ.  BARRYMORE will be presented by TD and is being produced by KEVIN ALBRECHT, STEVE KALAFER and PETER LeDONNE.

"TD is proud to present Christopher Plummer’s return to the Toronto stage in this historic engagement,” said TD’s Vice President-Global Brand & Corporate Marketing, DIANNE SMITH-SANDERSON. "We’re thrilled to be part of such a unique sponsorship opportunity with the potential to expand more broadly across the border and reflect our presence in North America.”

BARRYMORE offers an unforgettable portrayal of legendary actor, John Barrymore, a man of colossal talent and contradictions, also considered one of the greatest Shakespearean actors of all time.  Set in 1942, the final year of John Barrymore's life, BARRYMORE takes place on the stage of a Broadway theatre, where the actor is struggling to recreate his performance in the title role of Shakespeare's Richard III.   Playwright William Luce ("The Belle of Amherst") shows us the many facets of this complicated man and dazzling actor:  the wives and the women... the drink and the profanity... the notoriety and the glory...in a portrait that's "fiendishly entertaining and blistering sad," and made all the more indelible with Christopher Plummer's "achingly funny, memorably strong and debonair performance (The New York Times)."

Actor, JOHN PLUMPIS, is featured in BARRYMORE in the role of "Frank," the unseen, off-stage prompter/stage manager who assists John Barrymore with running his lines and coaxing out a performance.

• BARRYMORE will be performed on Monday-Wednesday and Friday-Saturday evenings at 8:00pm at the Elgin Theatre (189 Yonge Street)
• Complete ticket information at this link 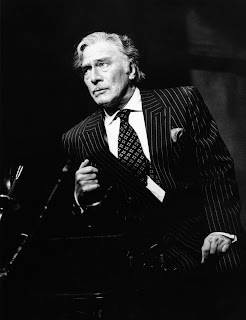 A Canadian from Montreal, Plummer made his professional debut on stage and radio in both French and English.  Since his New York debut in 1954, Plummer has starred in many prestigious Broadway productions, including his Tony-winning performances in "Cyrano" (1973) and "BARRYMORE" (1997).  In 2004, he scored his sixth Tony nomination for his performance in the title role of "King Lear" at Lincoln Center.  He garnered a seventh nomination in 2007 for his work in "Inherit the Wind."

Christopher Plummer scored a career triumph last year in his Oscar-nominated performance as Leo Tolstoy in "The Last Station," with Helen Mirren.  He also provided voices for the hit animated films "Up" and "9" and starred with the late Heath Ledger in Terry Gilliam's "The Imaginarium of Doctor Parnassus."  He  narrates Turner Classic Movies' (TCM) "Moguls and Movie Stars: A History of Hollywood," an ambitious, seven-part original production about the making of the American movie industry, which premiered in November 2010.

Plummer's many honours include Great Britain's Evening Standard Award, plus one nomination; two Emmys, plus six nominations; a Genie Award for "Murder by Decree" and Genie nominations for "The Amateur" (1981), "Impolite" (1992) and "Blizzard" (2003).  In 1968, sanctioned by Queen Elizabeth II, he was made a Companion of the Order of Canada, and he also received the Governor General's Life Achievement Award, an Honorary Doctor of Fine Arts from New York's Julliard School and additional honorary doctorates from six major Canadian universities. Plummer was elected into the Theatre's Hall of Fame in 1986 and joined Canada's Walk of Fame in 1999.
Plummer's unparalleled life is recounted in his autobiographical memoir, In Spite of Myself

ABOUT THE CREATIVE TEAM

Playwright WILLIAM LUCE previously wrote the Broadway and London hit, "The Belle of Amherst", starring Julie Harris as the poet Emily Dickinson, for which Ms. Harris won her fifth Tony Award for Best Actress.   Luce has twice been nominated for Writers Guild Awards for the CBS-TV movies, "The Last Days of Patton," starring George C. Scott, and "The Woman He Loved," starring Jane Seymour, Olivia de Havilland and Julie Harris.  He has also written autobiographical plays based on the lives of Lillian Hellman, Charlotte Bronte and Isak Dinesen.

Director GENE SAKS has won three Tony Awards for Best Direction and received ten Tony Award nominations.   He also won a New York Drama Critics Circle Award for Best Director of a Play and was elected into the Theatre Hall of Fame, among other honours.  As a theatre director, Gene Saks is best-known for his long-term collaboration with playwright and comedy writer Neil Simon, directing "The Goodbye Girl," "Lost in Yonkers," "Rumors," "Broadway Bound," "The Odd Couple", "California Suite," "Biloxi Blues" and "Brighton Beach Memoirs."

KEVIN ALBRECHT founded iSport Media and Management, and is the producer of the current CBC Television smash hit, "Battle of the Blades."  He was named by The Globe and Mail as one of the three most influential people in Canadian sports.