Here are some notes on the performances I was able to take in.

Barlight
Choreo- graphed by Dora award- winner Susie Burpee and performed by Claudia Moore with Kristy Kennedy
This duet was described as being inspired by film noir, but I saw a lot of animé in it too, with both dancers sporting dayglo fuchsia bob wigs against black pants and jackets. Certainly the overwrought drama and suspense of noir was the overall mood, with the dance set to moody string music. At times antagonists, and at times in synch, the atmosphere was aided by dramatic lighting and good use of the doors on either side of the stage. 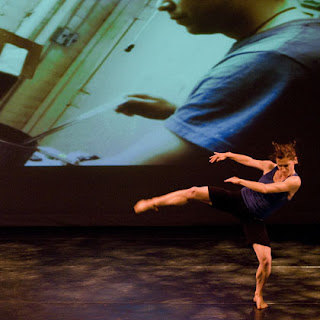 Exploded Music/ Expanded Dance
Created by David Buchbinder, Roberto Campanella and Robert Glumbek
Also featuring dancers Tyler Gledhill & Kelly Shaw, and musicians Daniel Fortin and Dave Restivo
The inventive idea at the heart of this collaboration was dance that supports the music - and not the other way around. The three dancers movements were rhythmic and repetitive against the melancholic nujazz riffs, and the piece flowed in several musical segments. Some were like tableaux, barely moving, and in one the barely moving dancers were so ill lit that I wondered about the point of them being there, but it was one short segment among many that intrigued.

Emoticonics
Directed by Weyni Mengesha, choreographed and performed by Troy Feldman and Kristy Kennedy
Sound designed and performed by aka SUBLIMINAL, and video and lights by Lorenzo Savoini, with choreographic consulting by Heidi Strauss.
With a beatbox soundtrack and an amusing look at life and love in the era of social media, Emoticonics was one of the highlights of the afternoon. Dancers Kristy Kennedy (contemporary dance) and Troy Feldman (aka bboy whiplash) went through a daily routine complete with subway commute and boring office grind, constantly texting. They meet in a nightclub and friend each other online - but can they actually get together in real life...? It was funny and truthful, a true multimedia construct that worked on all levels, including as pure entertainment. 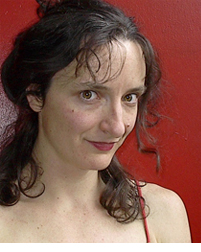 In the Hot Seat with guest choreographer Julia Aplin
The Ensemble with musicians David Buchbinder & Ravi Naimpally, dancers Jon Reid, Kelly Shaw, Tyler Gledhill, David Cox & Luke Garwood and poet Ian Kamau
I loved this segment, where a guest choreographer has a mere 20 minutes to put together a piece featuring all the members of the Ensemble - which included tap dancing (David Cox) and hip hop (Jon Reid) along with contemporary dancers. Parameters were chosen out of a hat: a setting in an E.R., a mood of melancholy and a moment of silence along with solo work. We watched as the piece took shape in fascinating form, an amazingly complete piece of work for 20 minutes from conception to performance.

Virtuosic Toronto
Conceived by Young Centre Resident Artist Waleed Abdulhamid, Andrea Nann, Noah Richler, and Suba Sankaran
With musicians David Buchbinder & Ravi Naimpally, dancers Jon Reid, Kelly Shaw, Tyler Gledhill, David Cox & Luke Garwood and poet Ian Kamau
The dancers were each given a 1 minute segment of film that depicted a Torontonian at work at a "virtuosic" level. A musician or poet was given the same segment. The results only came together at performance time in a really cool media mix. My only quibble was the format, which saw the film screened first, then the dancer performing alone, then the musician playing alone, then all three together - multiply it by five segments and it seemed a little overly drawn out. What I saw was an appealing parade of Thai and kickboxers, a carpenter, shucking oysters (at Starfish on Adelaide,) a guy playing kickball in the park and a shoeshine emporium.