PHIL OCHS: There But For Fortune, the new film about the iconic folk music hero of the 1960s, has U.S. Theatrical Premiere January 5th in New York at the IFC Center

New York, NY, November 23, 2010 – First Run Features is pleased to announce the U.S. Theatrical Premiere of PHIL OCHS: There But For Fortune, the new film by acclaimed filmmaker Kenneth Bowser

(Easy Riders, Raging Bulls & Live From New York, SNL in the 70s) about one of the most iconic folk music heroes and political agitators in American history.

As the country continues to engage in foreign wars, PHIL OCHS: There But For Fortune is a timely tribute to an unlikely American hero whose music is as relevant today as it was in the 1960s. Ochs, a folk singing legend, was moved by the conviction that he and his music would change 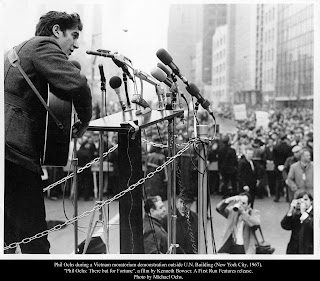 the world.  He loved his country and fought to honor it, in both song and action. Wielding only a battered guitar, a clear voice and the quiver of his razor sharp songs, he tirelessly fought the good fight for peace and justice throughout his short life.

Phil Ochs rose to fame in the early 1960’s during the height of the folk and protest song movement. His music, with lyrics ripped straight from daily headlines, spoke to those who hoped and fought for change.  From protesting the Vietnam War to supporting striking miners, to his attacks on sitting Presidents and mocking the politically disinterested, Ochs pierced the heart of the political establishment with fierce musical satire and righteous analysis. 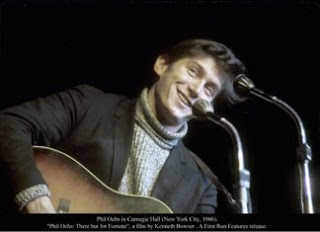 But by 1968, the mood of the country had changed. With the death of Martin Luther King Jr. and Bobby Kennedy, and the events of the Democratic National Convention in Chicago, all that seemed possible just a few years earlier began to fade.  Phil took this hopelessness to heart as if the failings of the movement were his own.  His mental and physical health declined as he sank deep into depression and alcoholism.  He took his own life in 1976 at the age of 35.

As prolific as he was passionate, Ochs released seven acclaimed albums and wrote hundreds of songs in his career. His songs became anthems for the anti-war movement and still beautifully reflect the pain and the possibilities of those turbulent times – and ours.  PHIL OCHS: There But For Fortune is buoyed by these anthems and melodies – from humorous to haunting – and throughout the film play the role of narrator, giving contextual depth to the unfolding saga of Ochs’ complex political and personal life.

In the film, Joan Baez, Tom Hayden, Pete Seeger, Sean Penn, Peter Yarrow, Christopher Hitchens, Ed Sanders, and others who knew or were inspired by Ochs tell stories of political passions that were equal parts idealism, conviction and fantasy mixed together with a big ego and often wild disorganization. 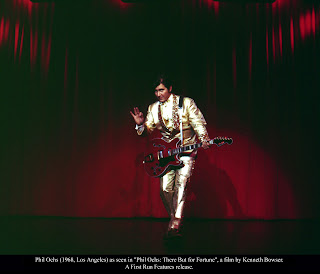 Today, the music of Ochs lives on, influencing and inspiring songwriters around the world. Artists such as Pearl Jam, Joan Baez, Ani DiFranco, Billy Bragg, and They Might Be Giants have covered his songs, the best-known of which include “I Ain't Marching Anymore,” “Changes,” “Crucifixion,” “Draft Dodger Rag,” “Love Me, I’m a Liberal,” “Outside of a Small Circle of Friends,” “Power and the Glory,” “There But for Fortune,” and “The War Is Over.”

A truth seeking troubadour, with a guitar in hand, Phil stood up for what he believed in and challenged us all to do the same. Unyielding in his political principals and unbending in his artistic vision, Phil Ochs, though branded a traitor by his critics, was above all a fiercely patriotic American.  This is his story.