on December 23, 2010
From a release - the Royal Cinema Toronto presents the perfect après Christmas treat - FREE of charge:

Sets The Cinema Back 900 Years! 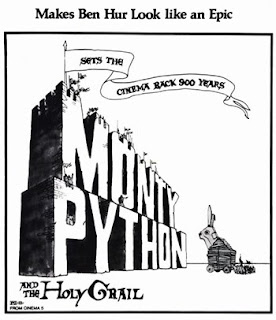 ...“Silly, sophomoric, and slapped together, but would you want it any other way? ” - Chicago Reader

“Has been so quoted and requoted that the scenes and words feel tattooed onto the psychic membrane.” - Globe and Mail

This classic Monty Python comedy, directed by Pythons Terry Gilliam and Terry Jones, is a hilarious send-up of the grim circumstances of the Middle Ages as told through the story of King Arthur and framed by a modern-day murder investigation. When the mythical king of the Britons leads his knights on a quest for the Holy Grail, they face a wide array of horrors, including a persistent Black Knight, a three-headed giant, a cadre of shrubbery-challenged knights, the perilous Castle Anthrax, a killer rabbit, a house of virgins, and a handful of rude Frenchmen.

One of my favourite scenes: