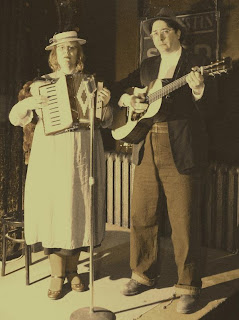 
TORONTO – MONDAY, DECEMBER 13TH – Toronto duo HOTCHA! is pleased to announce a stellar lineup of local indie talent for “PEOPLE STILL GOTS TA EAT”, a seventh annual benefit concert for the Daily Bread Food Bank. Roots Music Canada’s ANDY FRANK will be our MC for the event. There is no cover but generous donations (suggested $10) are most welcome as this is a fundraiser and all proceeds will go directly to the Food Bank. Those who donate will also automatically be entered in a raffle draw for many exciting prizes.


The tradition began seven years ago with HOTCHA!’s former band Solstice and the desire to help nurture the marginal communities of Toronto by celebrating the return of the nurturing sun on the winter solstice. Top notch performers volunteer their time and talent to this worthy cause as we celebrate seven years of success in helping to generate towards a healthier and happier community. Our wish of course would be that these types of services will in the future not even be necessary at all.
cameron house toronto daily bread food bank hotcha toronto roots music toronto christmas fundraiser toronto live music