Lynette Yiadom-Boakye & other shows at the Studio Museum Harlem

Any Number of Preoccupations
Lynette Yiadom-Boakye and other current shows
at the Studio Museum, Harlem

Any Number of Preoccupations is artist Lynette Yiadom-Boakye's first solo museum show, and takes up the main space of the Studio Museum. Born in Britain of Ghanaian descent, Lynette's work is exclusively portraiture and figurative, but taken into a kind of conceptual realm.

The show includes works completed between 2003 and 2010, with many large canvases in the main area, and smaller pieces in the smaller room to the side. Her subjects are also of African descent, and I walked through the whole show before reading that they were actually fictional characters. I was quite amazed - they come across as so fully realized, people with histories and personalities. I wasn't surprised to find that she's also a writer of short stories that often have inconclusive, open endings.

The portraits are remarkably individual. Lynette works quickly, often finishing a piece in one go, and apparently discards many of them even as she keeps others. In terms of technique, they contain the elements of classic contemporary painting. The brushstrokes are fluid, most often in depicting cloth and almost to abstraction of the form.

In each piece, there seems to be one element that stands out by reason of colour and/or motion. Sometimes it's cloth, sometimes an element in the background - in 2010's Debut, the woman wears a white flower in her hair and there's one on the frame, as if she's about to step out (like Highriser - pictured).

In Diplomacy III, (also pictured,) a group portrait, it's a robed figure in white, along with a female figure in white and pink that stand out against all the men in dark suits. Reclining figures only appear in a couple of the smaller pieces. In some, the composition is quite dark, with the figure emerging more as you step away from the canvas - in those pieces, it's the eyes that pop out at you. In Significant Donkey's Feat (pictured,) it's the kinetic face and wild hair.

Other shows include The Production of Space, works from the permanent collection that speak to a relationship between bodies and public space. Permutations of the concept included Dawitt Petro's 2009 piece "Harlechrome", incorporating photos taken walking around Harlem. He examines the surfaces in particular, the textures of concrete, brick, stairs and walls.

Cameroonian artist Barthélemy Togou's staged confrontations on trains, at airport security checks and at border crossings feature wooden suitcases and other theatrical details, and are documented in photographs. They seem somewhat ambiguous in nature - half comedic, but also pointing at darker realities. Alice Attie's contribution included photographs of uniquely apt found locations, like Wake up Blackman spraypainted on a brick wall behind a fence. 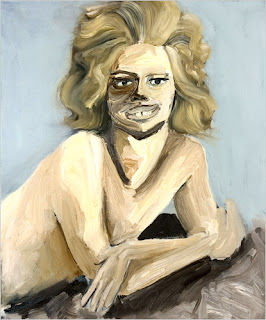 Dave McKenzie's amusing video We Shall Overcome features a guy in a mask (I think it's Bill Clinton) walking along 125th Street, waving to the puzzled public as the song plays.

I also enjoyed Dawoud Bey's Harlem, USA (1975-79) inspired by James VanDer Zee's show at the Met. This set of black and white photographs capture the neighbourhood and its people in barbershops, on the street, in doorways, everywhere.

There was lots more to take in, too much to cram into one post, including a black and white show downstairs, the VideoStudio and Mark Bradford's Alphabet - all of them worth taking in.
Matana Robert's SoundStudio makes a really interesting addition to the visual pieces.