Einstein on the Beach is a five hour opera/theatre performance that was first performed in 1976 at the Festival d'Avignon in France, followed by a European tour that summer, culminating, in the fall of the same year, in a presentation at the Metropolitan Opera in New York. Widely credited as one of the most important artistic achievements of the 20th century, this rarely performed piece raised its director, Robert Wilson, and composer, Philip Glass, to international stature, and remains one of their greatest masterpieces.

In 2012, nearly four decades after it was first performed and 20 years since its last production, Einstein on the Beach will be reconstructed for a major international tour, including the first performances in the United Kingdom and the first North American presentations ever held outside of New York City. The international tour of Einstein on the Beach begins in the spring of 2012, introducing this work to new audiences and to an entirely new generation. 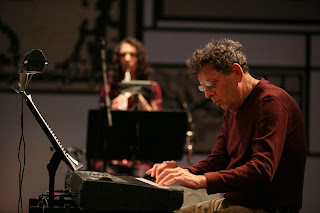 The opera juxtaposes the world of science with that of everyday existence, as seen in the life of Albert Einstein. It portrays modern inventions and technology, while addressing classic conflicts of mankind, and uses a series of powerful recurrent images as its main storytelling device.  The opera is structured in four interconnected acts and is divided by a series of short scenes or "knee plays."  There are no traditional intermissions.  Instead, the audience is invited to wander in and out at liberty during the performance.

“For Bob and me, the 2012-13 revival of Einstein on the Beach will be a most significant event, since in all likelihood, this will be the last time that we will be together and able to work on the piece,” said Philip Glass.  “For audiences, few of whom have experienced Einstein apart from audio recordings, this tour will be a chance finally to see this seminal work.

In this production, my composition will remain consistent with the 1976 original. The technology of theatre staging and lighting has improved to such an extent that it will be interesting to see how Bob uses these innovations to realize his original vision.

Finally, without the tremendous commitment, stamina and ingenuity of Linda Brumbach’s Pomegranate Arts team, and the commissioning partners she has brought together to support this effort, this final revival would not be taking place at all. For them I am deeply grateful.”

“Philip and I have always been surprised by the impact that the opera had and has,” said Robert Wilson.  “I am particularly excited about this revival, as we are planning to re-envision Einstein with a new generation of performers, some of whom were not even born when Einstein had its world premiere.

Aside from New York, Einstein on the Beach has never been seen in any of the cities currently on our tour, and I am hoping that other cities might still be added. I am very curious to see how, after nearly 40 years, it will be received by a 21st century audience.”

“Einstein on the Beach broke all of the rules of traditional opera, and remains one of the most remarkable performance works of our time,” said Luminato CEO Janice Price.  “The reconstruction of this first collaboration by two contemporary titans will be compelling to those who experienced it previously, and will also introduce a completely new audience to the work.  Einstein continues Luminato’s tradition of presenting epic, new and re-imagined productions of groundbreaking artistic works.”

• Opéra et Orchestre National de Montpellier Languedoc-Roussillon is scheduled to present the world premiere of Einstein on the Beach at the Opera Berlioz Le Corum on March 17 and 18, 2012.
• From May 4-13, 2012, the Barbican will present the first-ever UK performances of the work in conjunction with the London 2012 Cultural Olympiad,
• followed by the North American premiere at Luminato in June 2012.

Details regarding tickets for this event will be announced at a later date.

The Brooklyn Academy of Music (BAM) 2012 Next Wave Festival will once again be home to the New York premiere, having presented the 1984 and 1992 iterations.

From a documentary about the 1984 BAM production:

Having never before been presented on the West Coast of the U.S., the production will run for two weeks in UC Berkeley’s fall 2012 Cal Performances season.

Before the tour, in January 2012, the entire Einstein on the Beach company will be in residence at the University of Michigan, Ann Arbor, whose University Musical Society will host technical rehearsals and early previews. 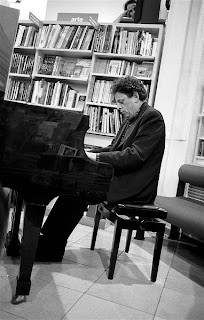 The fifth anniversary edition of Luminato 2011 takes place from June 10-19.  Programming announcements will be made in early 2011.  Tickets for all Luminato 2011 programs will be available for sale in April 2011.  For details, please visit www.luminato.com.