on December 07, 2010
Nueva York at El Museo del Barrio
presented in collaboration with the New-York Historical Society
on view to January 9, 2011

While it falls under the category of "art exhibition" on El Museo's website,  a more accurate description of Nueva York would be multimedia exhibit that includes art works, maps, ledgers and other old documents,

archival photographs, printed books, artifacts, an installation by Puerto Rican artist Antonio Martorell, and a documentary by Ric Burns, all of which examine the role that Spanish speaking peoples have had on the city's history and culture over about three centuries from 1613 to 1945.

The story, as told in the first part of the exhibition - Empires & Revolutions, covering the period of 1613 to 1825 - is largely a story about European imperialism and rivalries. The Dutch, the first white people to establish the settlement known as New Amsterdam, and the British, who took it over in 1664 and renamed it New York, were 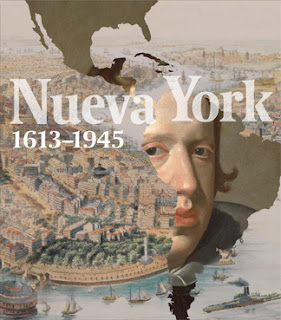 motivated to a large degree by the notion of countering the then stronger influence of Spain in the Americas. They sought, in effect, to establish the anti-Spanish empire, and that animosity towards Spain came and went in waves over the succeeding centuries.

There are documents and other artifiacts attesting to the presence of Spanish Jews in the city from fairly early on. Period paintings of Spanish monarchs, videos and maps, old photographs, ledgers and other documents bear witness to the way the Europeanss enriched themselves with silver, sugar and chocolate they found in their "new" world. A painting by Juan Bautista Romero - Still life with Hot Chocolate 1775 - depicts the tasty typical breakfast of a Spanish person of means. Cocoa is originally from Mexico, of course, where the Mayans drank a spicy brew based on the dark flavour. One thing of note is that Nueva York makes little mention of the indigenous peoples of the continent, except obliquely and by inference, as in this case.

After a period of demonizing the Spaniards, Spain and France supported the American Revolution, so there was a newfound tolerance for Spaniards in NYC in its aftermath. It resulted in increased commerce with Spain, and later Spanish America, namely Cuba and Puerto Rico.

Catholicism was tolerated in the city in the late 1600's, but then banned under British rule. It too found a new tolerance after the American Revolution. 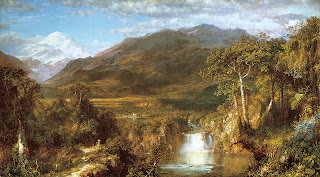 Art itself begins to play a role in Spanish American culture, and that in various ways from the strictly documentary to what could be described as more like a PR campaign. The Spanish American Independence Wars of 1810 to 1825 are depicted in paintings of the battles. The public image of Spain in America was further elevated by people like Washington Irving, who romanticized Columbus and his travels. Painter William Merritt Chase, under the influence of Diego Velasquez , produced idyllic paintings of the picturesque Spanish countryside. Frederic Edwin Church was part of the Hudson River Group, and his South American landscape "Heart of the Andes" (shown above) was a sensation when it was shown in the city in 1859. 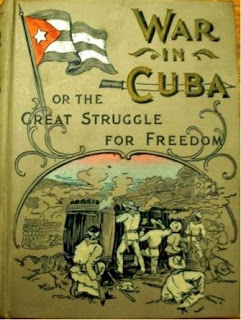 On the business end of things, New York City was a prime importer of sugar and developed a significant presence in the sugar refinery business, with many refineries setting up shop in Brooklyn in the 1720's. Politically, New York was a haven for revolutionaries from Cuba and Puerto Rico. The show includes a large portrait of Eugenio Maria del Hostos - a significant figure in the Puerto Rican independence movement. Nueva York mentions that the U.S. involvement in the Spanish-Cuban revolution was race based - with a white society who feared the multi-racial model proposed by the revolutionaries.

There is a greater concentration of art work in the parts of the exhibit dealing with the modern era - 1900 to 1945 - including not only the pieces themselves but the histories that intertwine them with the city. MoMA published prints by Diego Rivera in 1933, helping to cement his artistic reputation. Mexican muralists Rivera, David Alfaro Siqueiros and José Clemente Orozco all spent time in Manhattan. Noted Cuban painter Amelia Peláez del Casal studied at the Art Students' League in NYC in 1924, and other significant purchases by MoMA in particular included the work of Argentinian avant garde cubist Emilio Pettoruti and Mexican abstractionist/surrealist Rufino Tamayo. 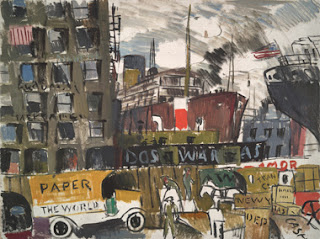 During the Spanish Civil War, new ties were forged when New Yorkers went to join the fight. Picasso's Guernica toured the U.S. to raise funds for Spanish refugees, and MoMA safeguarded the painting until Franco's death in 1981.

Ric Burns documentary film picks up the story from 1945 on, beginning with the working class Puerto Rican influx into the city in the 1940's in a very abbreviated look at the last 75 years, a period during which the character of the city and influx of people from all over the world added new layers of complexity to the cultural mix.

From Here to There, the installation by Antonio Martorell, was inspired by the "air bus" immigration of Puerto Ricans to mainland USA in another interesting addition to the show, full of colour and life, and the necessary optimism of immigrants. 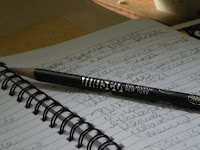 Nueva York is complemented by a small show of work from the permanent exhibition, including New Yorker Manuel Vega's busy and colourful representational pieces and Puerto Rican artists Diogenes Ballester and Arnaldo Roch-Rabell.

Just a word to the wise - El Museo has slightly odd rules that are no doubt the result of too many destructive high school tours - you must check any coat or jacket you're not wearing, and no pens are allowed, although they will sell you a pencil and sharpen it in the gift shop.
el museo del barrio latin american art and culture in new york new york historical society nueva york visual arts in new york