on December 09, 2010
From a media release - Team Awesome and PB&J Sketch Comedy Nights are back at Bread & Circus in Kensington Market - answering all your urgent questions!

what’s the pb and j inclusive holiday special sketchprov show?
It’s part of the new monthly show by awesomely adorable comedy troupe PB and J, going up the third Thursday of every month at the Bread & Circus Theatre in Toronto,  ON. For this night, PB and J will 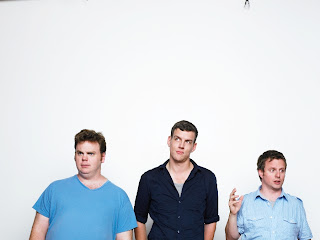 perform their new and almost-patented form of comedic improv called “sketchprov” with a special holiday theme for all their scenes, with guest comedy and musical acts joining in on the fun! Also, bring a non-perishable food item (that  we’ll donate to the Daily Bread Food Bank) and get in for half-price. Do some good, get in for cheap, and get some laughs!

who is pb and j?
Just a trio of some of the hottest and established performers in the Canadian Comedy Scene.
• P is for Pat Thornton, creator/star/head writer of the Comedy Network series Hotbox and founding member/former head writer of the Sketchersons’ Sunday Night  Live.
• B is for Bob Banks, from the improv juggernauts Big In Japan and Mantown!
• And J is for Jason DeRosse, from The Second City Touring Company and well as Mantown!, the sketch troupe Maybe and also Hotbox.

what the heck is “sketchprov”?
“Improv”, where scenes are made up on the spot, can take many different forms. In “Sketchprov”, PB and J focus their improv into the structure of “Sketches”. In other words, their improvised scenes tell a story and have a high joke ratio. So no time to rest between laughs, put up by a bunch of experts in improv and sketch-comedy!

what’s the history of pb and j?
PB and J was founded in 2007 as a group of friends who wanted to combine their individual talents to see how many jokes they could cram into every improv scene they  created. Their first major show was in 2008 as part of the Toronto Sketchfest’s alternative improv show. After successfully crafting the show "Cookie Party", they took it on the road to sold-out shows in Winnipeg, Edmonton, Montreal and New York. In 2009 they brought in guest directors to help the group create a new show format that was uniquely theirs. This birthed "sketchprov" and the group’s new monthly show, which Pat, Bob and Jason know will haveaudiences laughing in their seats!