Toronto since 1990. Rich in magical surprises, mechanical ingenuity and inventive puppetry, Tea at the Palace is a sumptuous retelling of a heartwarming Russian tale about justice, humanity and love. Created and performed by Ann Powell and David Powell, and directed by Sharon Weisbaum, it is a sensory feast with something for everyone: adults and children aged 5 to 12 in particular. Tea at the Palace runs at Tarragon Theatre's Extra Space from December 18, 2010 to January 1, 2011 with matinees daily at 2:00pm and added 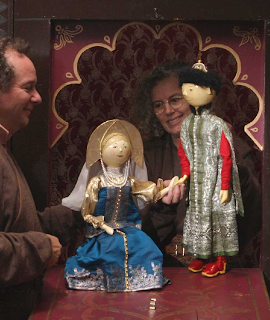 Tea at the Palace is a delightful re-telling of two Russian folk-tales. A medieval Russian peasant is shocked when he is dragged to the Tzar's court, charged with treason simply for making tea. Meanwhile, the Tzar has become smitten with a clever girl beneath his social rank when she arrives at court with her mother and a neighbour to settle a dispute. His meddlesome servants complicate things with ridiculous antics as they try to thwart their budding friendship. With exuberant folk music, magical pop-up scenery and a fascinating array of puppets (that range in size from 6 inches to six feet!), Tea at the Palace is a magical holiday delight.

The Powells bring the puppets to life while remaining in full view of the audience. The costumes are authentic to the district of old Russia from whence the stories came and the puppets are based on different types of antique dolls. The music is created and recorded by the talented team of David Anderson and Nuno Cristo, drawing on favourite traditional Russian songs and folk instrumentation.

David and Ann Powell, aka Puppetmongers Theatre, have been charming and bewitching audiences for 36 years with their extraordinary creations. At the forefront of puppetry arts in Canada, the award winning Puppetmongers have created more than 10 original shows, both for young audiences and adults, and have toured throughout North America, Europe, and the Middle East. Their puppetry was featured in the 2007 film Mr. Magorium's Wonder Emporium, starring Dustin Hoffman and Natalie Portman. Of their recent show Hard Times, the Globe and Mail noted: "The glory of this production are the puppets, all designed, constructed and costumed by the ubertalented Powells." 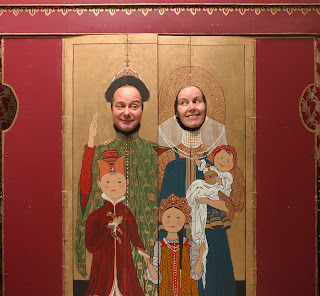