December 17, 2010
From a media release about a self produced artist who snagged a Grammy nomination:

When the GRAMMY nominations were announced earlier this month, a light shined on the untold story of a singer little-known in the music scene. This is the tale of a woman who scoured every corner of the planet in 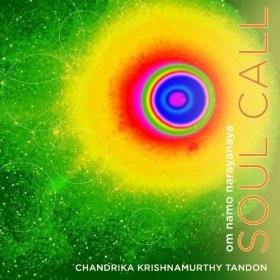 search of soulful music, while climbing the elite ranks of business circles. After years of intense study, she is taking an ancient song form normally sung on streets and in homes, and sharing them in service to others. Her name is Chandrika Krishnamurthy Tandon and her album, Om Namo Narayanaya: SOUL CALL (on Soul Chants Music), has been nominated for a GRAMMY in the Best Contemporary World Music Album category, alongside musical greats like Béla Fleck, Bebel Gilberto, Angelique Kidjo, and Sergio Mendes.

Soul Call is more than music. The eight songs were composed around a single eight-syllable chant that is over six thousand years old. Chandrika composed each song to follow a different Indian raga. She recruited global sarod maestro Tejendra Narayan Majumdar to create arrangements using over 30 acoustic Indian classical, folk, and Western instruments including the vibraphone, acoustic guitar, and bass. It features renowned, master Indian musicians recorded in

The eight syllables of this chant-Om Na Mo Na Ra Ya Na Ya-are believed to form a protective armor around the body. "These syllables are literally vibrations from the ancient Vedic tradition handed down from generation to generation," explains Chandrika. "Many traditions have incredible healing mantras whether in Africa, Brazil or Tibet . I can't tell you in detail how they work; some things are beyond explanation. You have to experience it yourself."

"The beauty of Chandrika's music comes from her focus on excellence in everything she does," says Soul Call'sengineer John Kiehl, co-founder of NYC's legendary Soundtrack Recording Studios, who has worked with Roberta Flack, LL Cool J, and Mariah Carey. "Soul Call is barrier-breaking. Of course, this album is rising to the top."

For years, music was in Chandrika's soul, but not in her cards. "As a child, I sang in school music choirs and won awards, but it was not 'proper' in my family to pursue a career in music. In business school in India, I 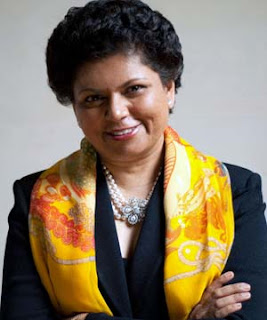 would finish my coursework and go into a music room stocked with just a few albums," Chandrika remembers. "My yearbook says 'She killed us softly with her song,' because I would listen to Roberta Flack, Neil Young, or Sergio Mendes albums ten times in a night, until three in the morning."

Chandrika has come a long way since her arrival in New York 30 years ago. She showed up with only 24 dollars in her pocket, hired by McKinsey, America 's most prestigious management consulting firm. With her first paycheck, she went out and bought a Martin Guitar and a great hi-fi, so she could finally hear her favorite music in stereo, sleeping on the floor for six months till she could finally afford furniture.

But all that changed. Her career flourished, she was elected a company partner (the second woman to do so), and she formed her own company winning many accolades. She traveled the world constantly, from Australia to Amsterdam; from festive Brazil to war-torn Beirut. In each culture, Chandrika would seek out local musicians, learning the local language through music. In Salvador, Bahia, she followed Carnaval bands on the streets. In Beirut, she traveled miles to attend the Baalbeck International Festival, held among Roman ruins. In London and Paris , she pored over record stores' bins. Back home in New York, she attended her favorite concerts two or three days in a row. She worked in numbers and strategies; she dreamt in music. 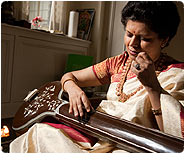 The intense yearning for music was bursting to get to center stage in Chandrika's life.  "I woke up one day when my daughter was starting high school and realized that, though I had reached many measures of business success, I had not connected with my deepest self, my life's purpose," says Chandrika. "I went on a journey going back to who I am. I asked myself what makes me happy. And it struck me that all of my happiest moments in life go back to music! I needed to pursue my passion for music and share it with everyone."

Chandrika began seeking out extraordinary music teachers and performers; anyone that resonated that could give her a rigorous grounding in classical Indian music.  She'd travel to India for a week at a time to learn with a great maestro. One year she'd wake up at 4 am every weekend to drive from New York to Wesleyan for master classes with a Carnatic music professor, and be back by 10 am when her young daughter awoke. "I was a music seeker. I found ways to learn from the greats, whenever and wherever they would teach me."

Even while she was getting a rigorous grounding in classical Indian music, Chandrika's heart was always drawn to simple songs based on classical Indian scales; songs that made the joy of music reachable to more people. When she could not find what she wanted to sing, she started composing; hundreds of joyous compositions in classical scales, but with all the global music that was part of her spirit. "My soul is uplifted when I can sing with others." Now she gets many calls to lead participatory singing events at yoga, meditation, and community service gatherings, and conducts musical choirs; all efforts to share music with love.

Chandrika has taken this mission of sharing one step further with her non-profit, deciding that all of the proceeds from her album are being donated to benefit organizations in the fields of community building, arts, and spirituality.

"This CD is about creating a circle of love," says Chandrika "We are reaching out to each other; we are reaching each other's hearts and souls through the beautiful sounds that the universe has given us a chance to create. Music breaks boundaries easier than words."

Being a newcomer to the music industry, Chandrika extends this philosophy to her GRAMMY nomination. "This is about a shared celebration of music among musicians; I have met so many musicians that I now admire, they are such mind-blowing talents. I feel utter gratitude to those that took the time to listen, to share feedback, and to support an unknown like me."

But it is not only musicians in the GRAMMY community listening to Chandrika's voice. The Soul Chants Music fan page on Facebook which started with a trickle six weeks ago, is teeming with spontaneous testimonials from new fans worldwide-now over 12,000-each with their own story of listening to the album or how they integrate this music into their life.

"I am hearing your voice for the first time and am totally lost. Grammy or no Grammy your voice is like soothing balm on the soul," wrote one fan. "I heard you sing last summer and was moved by the depth of your voice and what it evoked inside of me," commented another. "This song has truly left me enchanted. I begin my day listening to this soulful song as it keeps me energized," says a fan.

Where now? What next?  Chandrika says, "I live by a two-line quotation from a Sufi mystic: 'When I was there, the divine was missing; When I left, the divine took over.' My quest is to lose myself."