If you can't make it to the Open House, the gallery is on view by appointment - check the link & send an email to set up a time. 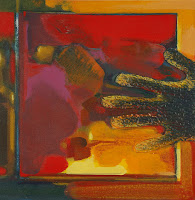 Bill Karg's latest show at the Contemporary African Art Gallery in the Upper West Side, - West African Stew - offers an eye catching range of stylistic variations in an elegant townhouse setting. This Saturday afternoon you'll be able to check it out as you browse one-of-a-kind jewellery and other gift items. 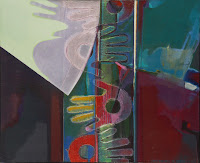 The work of  Senegalese artist Fodé Camara, primarily acrylic paintings on canvas, is instantly appealing. His pieces emphasize bright and richly saturated colours in a semi-abstracted style. Some of the pieces include handprints; in Notice, there are waves, sometimes other recognizable elements. The canvasses are kinetic, full of dynamic movement, and he often uses big brushstrokes, with some texturing of the paint surface. You really feel the lively and irrepressible nature of West Africa in his art. (Paintings pictured are Action III and Solidarity)

Sokari Douglas Camp's bronze sculpture depicts a figure called Chief Aramchree in amazing detail, including the patterning of clothing and jewellery. It's small in stature but has a curious kind of presence - probably what he saw in his subject.

Ouattara, from the Ivory Coast, works in pastel. As Bill tells it, Ouattara refuses to talk about the exact sources of inspiration for or meaning in his work. He met Jean-Michel Basquiat while studying in

Paris in 1988, and the former was so captivated by his art that he arranged to show some of it to dealers in New York. Ouattara followed and has made the city his home since 1989. In the St. James Guide

, Ouattara has described his works as "personal and spiritual documents filled with inscriptions for the world to discern." Bill says Ouattara felt Basquiat declined and lost his creativity for the very reason that he did speak about it too much, and gave too much of himself away. 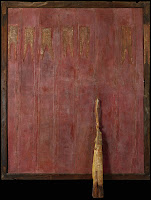 His works are infused with a sense of spirtuality and ritual, often with human or spirit like figures and natural motifs. The tones are rich, and the overall effect is quite atmospheric and evocative. (Works depicted here are Oliranos & Spirit King)

You'll find other pieces here, some by Senegalese artist Viyé Diba, (which I've described in a previous post). His abstract works are subtly nuanced in tone and texture, and for me, they exude a kind of warmth. (Red Escape pictured right)