Toronto - The acclaimed Art of Time Ensemble, under the artistic direction of Andrew Burashko, presents Take This Waltz, a diversely rich and compelling program that explores the waltz throughout the last 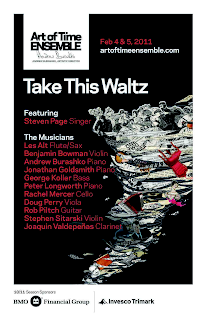 A stellar lineup of outstanding classical and jazz musicians along with celebrated singer Steven Page perform:

The evening is book-ended by two legendary waltzes: the late 19th century Emperor Waltz from Johann Strauss (1825-99), the "king of the waltz," in a version for string quartet (Bowman, Mercer, Perry, Sitarski), piano (Burashko), flute (Allt) and clarinet (Valdepeñas); and La Valse by Maurice Ravel (1875-1937) for two pianos (Burashko and Longworth that marks the demise of the Strauss age.

Also on the varied program is:
• a movement from Alfred Schnittke's (1934-1998) Piano Quintet written in the 1970s in memory of his then recently deceased mother. This haunting, dissonant waltz is performed by Burashko and string quartet.
• a movement from Dmitri Shostakovich's (1906-75) Jazz Suite No. 1, a bluesy, playful piece (Bowman, Mercer, Burashko, Koller, Piltch and Allt).
• A short set of four waltzes by Chopin, Brahms and Pedro Saenz for solo piano, performed by Andrew Burashko.
• Mephisto Waltz, a pyrotechnical solo piano piece by Franz Liszt (1811-86), performed by Peter Longworth, full of devilish chords and dark sounds.
• The second movement from Erich Korngold's (1897-1957) densely lyrical and romantic Suite Op. 23 for piano (Burashko), cello and two violins.
• Waltz for Debby, a jazz standard composed by legend Bill Evans (1929-80), this musical portrait of Evans' niece is performed by Jonathan Goldsmith on piano and Rob Piltch on guitar.
• Steven Page sings four contemporary songs based on waltz rhythms, explored in different ways. Note that all of the songs have new arrangements, except for A Singer Must Die as Art of Time previously commissioned the arrangement for the Songbook 2 program in 2008 with Page when it debuted. The same combination of jazz and classical musicians from Jazz Suite No. 1 accompany him.

STEVEN PAGE
Steven Page was the lead singer and songwriter of the Barenaked Ladies from 1988-2009, one of Canada's most enduring success stories (15 million albums sold, numerous Juno awards, two Grammy nominations, two Gemini awards). Now on his own, his solo album, Page One, was released this past fall. He has also composed music for three productions for the Stratford Festival, most recently Ben Jonson's Bartholomew Fair in 2009. Page and his band are touring North America in 2011.