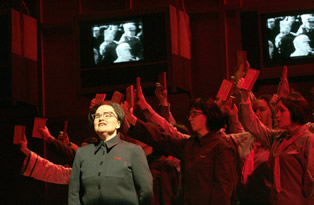 trip to China in 1972 was a media phenomenon viewed simultaneously by millions at home on their television sets.  Adams’ unique lyrical score for Nixon in China intertwines occasions of grand, public spectacle with moments of quiet, private reflection to transform a political event into a story with universal appeal and significance.  American James Robinson returns to the COC to direct this highly-lauded and widely-seen production with award-winning Spanish conductor Pablo Heras-Casado making his Canadian debut leading the COC Orchestra and Chorus. 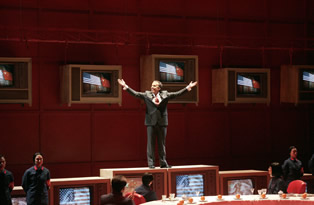 Nixon in China had its world premiere at Houston Grand Opera in 1987, followed quickly by performances at the Brooklyn Academy of Music, the John F. Kennedy Center for the Performing Arts and Netherlands Opera.  One of the major operas of the 20th century, Nixon in China has spawned numerous productions that have been received all over the world, and, along with Philip Glass’s Einstein on the Beach, is considered one of the cornerstones of American Minimalist music.

The COC premiere of Nixon in China brings together several cast members who have appeared in this production since its first staging at the Opera Theatre of St. Louis in 2004.  Hailed by critics in his “sensational portrayal of Richard Nixon” (Houston Chronicle) is leading American baritone Robert Orth, last seen with the COC in 1990’s The Barber of Seville, and American soprano Maria Kanyova revisits her critically-acclaimed role as Pat Nixon in her COC debut.  New to this production, and the COC, is British tenor Adrian Thompson as Chairman Mao, who previously sang this role with English National Opera.  Baritone Chen-Ye Yuan appears with the COC for the first time, revisiting the role of Premier Chou En-lai.  American 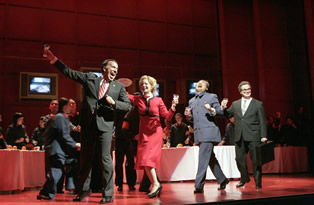 bass-baritone Thomas Hammons makes his COC debut portraying Nixon’s diplomatic advisor Henry Kissinger, a role he created for the opera’s world premiere, and subsequently performed in Amsterdam, Paris, Frankfurt and Los Angeles.  Making her COC and role debut as Madame Mao is American soprano Marisol Montalvo, whose stage and vocal presence has made her a regular performer with many of the world’s finest opera houses.

Making his Canadian debut is young Spanish conductor Pablo Heras-Casado.  An exciting newcomer on the international conductors’ scene, Heras-Casado is admired for the versatility of his repertoire (from early music through to cutting-edge contemporary scores) and was unanimously voted winner of the 2007 Lucerne Festival Conductors’ Competition by a jury headed by Pierre Boulez and Peter Eötvös. 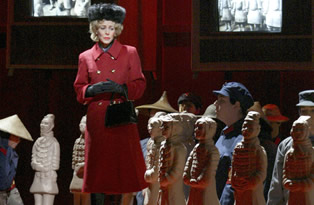 Check their website for additional programmes and pre-opera talks.

Tickets:
• Available online at coc.ca
• Or by calling COC Ticket Services at 416-363-8231
• Or in person at the Four Seasons Centre for the Performing Arts Box Office, located at 145 Queen St. W.

NEW THIS SEASON: Standing Room
• Standing Room tickets for only $12, go on sale at 11 a.m. on the morning of each performance at the Four Seasons Centre Box Office.
• Limit of two tickets per person.
• Subject to availability.

Young People
• Special young people’s tickets are priced from $31 to $95 plus applicable taxes.
• These ticket prices apply to those who are 15 years of age or under, accompanied by and sitting next to an adult.