on January 20, 2011
From a media release. Latin rhythms and spirituality converge in the work of this multi-disciplinary artist. The music is infectious and will make you want to move (and I guess that's the point). 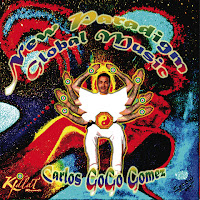 “One of the reasons for creating this music was to integrate the various parts of my life into one,” Gomez explains. “I wanted to break down those barriers that exist between being a priest here and a musician there and a martial artist over there.” 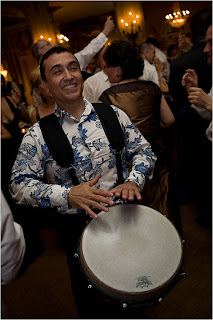 Eloquent drones and elegant beats—punctuated by Gomez’s evocative and passionate percussion—reveal this newfound place of unity and an omnivorous musician at his best. Gomez has dug deep into his Afro-Latin heritage and played with Eartha Kitt, Tito Puente, Maxwell, Sade, and Mariah Carey, to name just a few. Yet this album reflects a new understanding, a new sense of unity and resonance after an amazing career and very full life.

Gomez, raised in the Bronx, grew up playing drums from the moment he could walk. Fascinated by both the Santeria saints/orishas of his Cuban mother and the revelatory Latin rock of Carlos Santana, Gomez became a professional musician and yogi in his teens, founding the groundbreaking group Seguida with several close friends. The band took Latin rock one step further—into soul, funk, and disco territory—and Gomez became an extremely versatile hard-gigging player.

And a powerful percussionist—so powerful it affected his health and nearly cost him his life. After doctors gave up on him, he turned to an Akan (West African) priest in Queens, who through herbs and prayer returned Gomez to both health and music. Gomez was so moved by the experience, he eventually traveled to Nigeria and became an Ifa priest himself. He continues to pursue both physical disciplines such as jeet kune 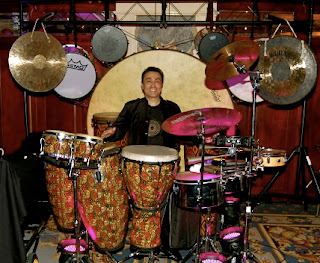 do, tae kwon do, and yoga, and spiritual ones—reading and studying intensively about theosophy, the Kabbalah, and practicing meditation, Taoism, and Inner Alchemy.

This seemingly diverse experience converged one day a year and a half ago during a meditation workshop led by teacher Jim Self (whose voice graces “Law of Attraction”). During one meditation session, Gomez had a “transformative experience,” the kind of concrete, visceral spiritual experience he had craved for years. It changed the way he approached music.

No longer satisfied with simply “being someone else’s hands,” Gomez felt it was time to create music of his own. It was time to give expression to what he had gleaned from a complex and rich life behind the drums, in martial arts studios, and in temples. The resulting album traces an expanding spiral from slow and contained, to energetic and ecstatic, and finally to transcendent. “It’s an invitation to go inside, for listeners to reach the same state I found that day,” Gomez notes.

But this journey is not passive background music; its hypnotic quality is meant to spark movement and meaningful connection to the body. “Aremu Odudua” takes an age-old Santeria melody, as sung by Gomez’s late Afro-Cuban singing teacher Lazaro Ros, that tells of Odudua, the progenitor of the Yoruba. For Gomez, this Abraham-like figure resonates with Mantak Chia’s bone marrow cleansing qi gong—connecting with the bones, one’s very foundation.

The foundation of Gomez’s tracks is drones, and these reflect his many perspectives and influences, as well as his ultimate message. “Metu Neter,” inspired by the divination techniques described by Pan-African spiritual teacher and writer Ra Un Nefer Amen, unfolds in a “non-traditional mantra,” layers of sounds from different philosophies and faiths resonating as one.

“If you listen carefully, there are three levels,” Gomez explains. “The classic OM is divided into five different sounds, as it was taught to me at the Satchidananda Center in New York almost forty years ago. The second layer is a Taoist mantra, and finally the third is an Arabic chant reminiscent of the call to prayer. This was designed to represent the essential unity of all religions, that they are all part of the Universal Truth.”

Though the tracks revolve around drones—the sounds of flowing, splashing water on “Water Dragon” or the bells of “Law of Attraction”—Gomez’s sixth sense for rhythm keeps them hypnotic yet never static. “On ‘Metu Neter,’ for example, I was trying to constantly change my conga playing in a subtle way; it’s a metaphysical part of the song,” Gomez reflects. “Pop music requires absolute precise repetition, and before digital recording, I had to do it physically. That’s how I got on so many records. But I’m breaking that mold, and instead, I’m trying to create constant subtle change so that you barely even notice it, much like life.”

These musical concepts serve a greater goal: Gomez’s message of spiritual unity, love, and connection to the inner self through the body. “I love movement, and that’s why I did yoga and martial arts. But many people think dance and movement is just about seduction and sex,” muses Gomez. “Yet there’s also dancing for your own personal joy and for your spirit. Dancing can lead to internalization, to a transformative state of ecstasy and bliss.”
carlos go go gomez cd release global new age music kidlat records latin percussion new age music spiritual music spirituality of dance