on January 29, 2011
From various sources - comedy and beer on special this month in Toronto: 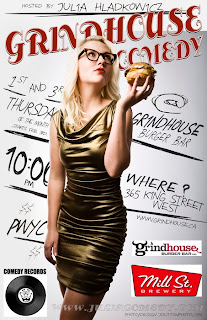 Who is Julia Hladkowicz? She is a comedian and actor who has won numerous awards in the world of comedy, including the Hogtown Comedy Festival Directors Award, a 2008 Fresh Meat Showcase Nomination, the prestigious Brian Linehan Scholarship Award and was crowned Last Comic Smoking. This blonde dynamo is a rising star at YukYuks and she recently returned from a California tour.

Grindhouse Comedy is a bi-monthly show hosted and produced by Julia making its debut February 3rd. This show will run the 1st and 3rd Thursday of the month is at Grindhouse Burger Bar at 365 King Street West (King and Bluejays Way), and Julia's promising a hot line up.

• It starts at 10PM
• A PWYC show
• Amazing burgers which will be served all night and Mill Street beer specials! 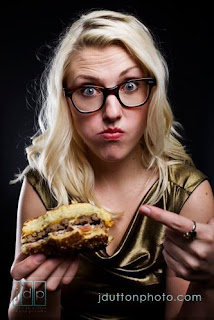 After her own gig on the 3rd, Julia joins a cast of several at Matt O'Brien's stand up on Czehoski on Queen on the 15th, where Matt O'Brien is hosting:

Comedy Records Presents the first of a monthly stand-up showcase at Czehoski on Queen! 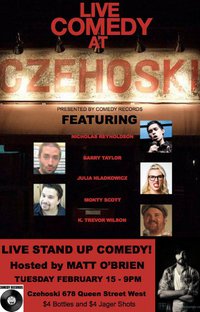