Losing a Generation of African Artists 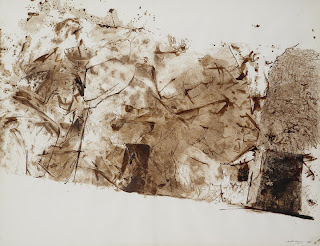 We are losing the Elders of Contemporary African Art. This is a very select group of artists who had the courage to turn their backs on tradition in this most traditional part of the world where an individual would rarely be treated as distinct from the community. With no access to art schools, some of these elders persevered without any formal training while others had to find a way to schools in Europe. Still others founded their own art schools so this way of expressing one's self would become recognized and respected. (Pictured - Urban Landscape by Iba Ndiaye).

South African Ezrom Legae Was The First To Leave Us 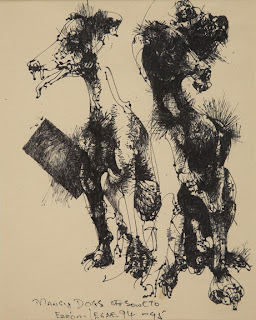 South African Ezrom Legae was the first to leave us; felled by cancer far too early. He both studied and was a director of the Jubilee Art Center, housed in a public recreation center in Johannesburg at a time in the 1960s and '70s when it was not possible for a Black artist to get a formal art education and only a dream that they would be able to exhibit their work.  Before he died, his work was in the National Museum of African Art at the Smithsonian. (Pictured - Mangy Dogs of Soweto by Ezrom Legae).

Ethiopian Skunder Boghossian & Iba Ndiaye From Senegal Were The Next 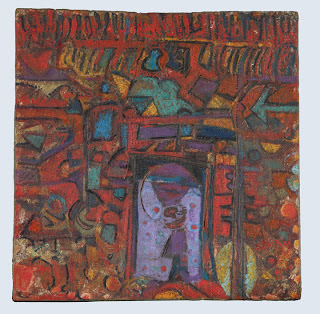 Ethiopian Skunder Boghossian and Senegalese artist Iba Ndiaye were probably at the School of Paris together but claim never to have met. At least their work met. Both are in the Musee d'Art Moderne in Paris and in the MacArthur Foundation collection. Both were well represented by their work in the Short Century exhibition. Both of them were artists and teachers and can be credited for the sustained group of Ethiopian and Senegalese artists in the world today. Iba Ndiaye started the School of Plastic Arts at the University in Dakar following independence and taught there for 12 years. Skunder Boghossian taught at the Fine Art School in Addis Ababa and then came to the United States where he taught a Master's Class at Howard University for over 30 years, sustaining young Ethiopian artists in exile and inspiring many young American artists. Another fact that they both shared is that they both deserved, but did not receive, a substantial retrospective. (Pictured - The Wait by Skunder Boghossian). 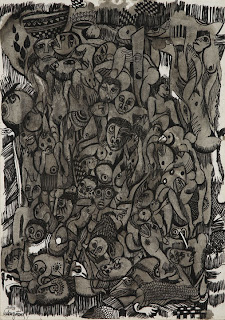 Now We Have Lost Malangatana Of Mozambique

Now we have lost another: Malangatana of Mozambique. While he traveled widely, he never left Mozambique during its struggle for independence or the South African inspired civil war that followed; a period of over 30 years. He was there to speak for his country and his people and the children to whom he taught every Sunday morning. Please be sure to read the very fine obituary by Holland Cotter  in the New York Times. (Pictured - Women In Motion by Malangatana).