on January 25, 2011
From a media release - I did an interview with actor Allen Altman about his role in the film last September when it premiered at TIFF - the kudos haven't stopped since.

TORONTO – JANUARY 25, 2011 – Entertainment One and Les Films Christal is pleased to 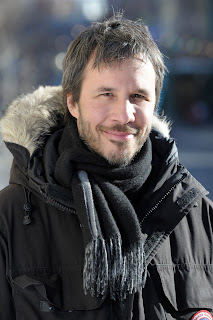 announce Canadian feature film INCENDIES directed by Canadian filmmaker Denis Villeneuve has been nominated for Best Foreign Film by the Academy of Motion Picture Sciences for the 83rd edition of the annual Academy Awards to be held in Hollywood, California on February 27, 2011.

After the news was announced this morning, Denis had this to say,

"This is one of the most intense nights and mornings in my life. This nomination feels like a very big Christmas gift to a 6 year old.  I want to share this honor with Wajdi Mouawad whose incredible play and ideas are the basis of the film.

I am proud that the film conveys the same message of reconciliation as the play, a message that is quite important in 2011."

Produced by Luc Déry and Kim McCraw of micro_scope Productions, INCENDIES is a riveting exploration of two parallel stories within one family torn apart by years of secrets and heartbreak. After their mother Nawal's death, twins Simon and Jeanne embark on a journey to the Middle East that shines a disturbing light on their mother's past and culminates in a shocking revelation. INCENDIES is based on the acclaimed play by Wajdi Mouawad and directed by the Genie and Jutra award-winner Denis Villeneuve (Polytechnique).

“We are incredibly happy, a bit overwhelmed about this nomination.  We are blessed to be working with Sony Classics, who led this campaign like the masters that they are. We also want to acknowledge the great support we got from Telefilm Canada, Sodec and Entertainment One in this process.” Says producers Luc Déry and Kim McCraw.

“On behalf of everyone at Entertainment One, I want to extend our congratulations to Denis, Luc and Kim for this well deserved nomination,” said Patrice Theroux, President Filmed Entertainment, at 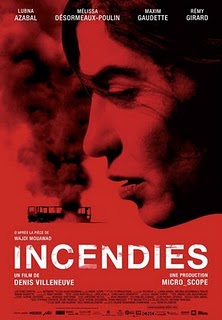 Entertainment One. “We were early fans of this sweeping drama and have watched the film win over audiences and capture awards at festivals around the globe. We hope this nomination exposes an even wider audience to Denis’ haunting and tragic tale.”

Entertainment One holds the international sales rights for INCENDIES which has been sold in more than 30 territories. The film was funded by the Feature Film Fund Telefilm Canada. The Canada-France co-production was produced by micro_scope (Montreal) in association with IHP Group (Montreal) and TS Productions (Paris).

About Entertainment One
Entertainment One (LSE: ETO) is a leading international company that specializes in the acquisition, production and distribution of entertainment content. The company’s comprehensive network extends around the globe including Canada, the U.S., the UK, Ireland, Benelux, France, Germany, Scandinavia, Australia, New Zealand and South Africa.

The film is currently in playing in Toronto, Vancouver and Montreal.

Opens this Friday at the Bytowne Theatre in Ottawa