on January 06, 2011
From a media release - they'll be crossing North America from the West Coast to the East and most parts in between - check the tour dates at the bottom of the post: 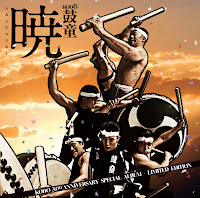 The preeminent Japanese taiko drumming group Kodo is celebrating their 30th Anniversary with the release of a new album and 2-month North American tour. Akatsuki will release January 22, 2011, just in time for the tour to kick off on January 26th, where they'll feature four new and innovative pieces.

Drums did more than make music in Japanese tradition. They were valuable tools found at every shrine. They marked the physical and metaphorical edge of a village: If you could hear them beat, you were part of the community.

Kodo, Japan's preeminent performing arts ensemble, has lived this principle for thirty years, using thundering, soothing sounds that turn audiences into one big village from Asia to South America. Known for its unique interweaving of committed lifestyle, musical mastery, and vibrant traditions, the group returns to North America in January through March 2011, with four fresh pieces, a brand new recording, and the pulse of ancient festivals.

Kodo unites high-energy percussion, elegant music, dance, and the striking physical prowess needed to sustain a precise yet powerful sound. Along with four pieces new to North America, the 2011 One Earth tour will see the debut of the youthful Kenta Nakagome on the group's hallmark giant drum, the almost 900-pound o-daiko - a challenging, show-stopping instrument that demands both strength and tenderness. 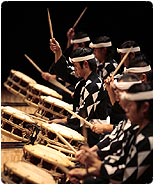 This contrast of bold and delicate runs throughout Kodo's new album, Akatsuki (Otodaiku; January 22, 2011). The CD and bonus video chronicling the group and the landscapes that inspire it act as companions to Kodo's dynamic live shows. Shamisen, koto, and kokyu (traditional Japanese fiddle) complement the percussive force, revealing the versatility of Japanese tradition and the performers who long to honor it. For several of the group's newer compositions, featured both on tour and on the album, Kodo brings out different facets, creating unique arrangements for both live and recorded performance.

Innovation is deeply rooted for the group, however, and constantly refers back to Kodo's unique grasp of Japanese traditional arts. The group has nurtured a new approach to staging and set design, which brings the spirit of Kodo's wooden rehearsal hall to the world's stages. Instead of hiding drums until needed, most of the group's instruments remain in view, much as they do in the wooden, ship-like hall where the group creates its pieces. It brings a fresh vigor to the performance, highlighting the simple but beautiful forms created by drum, musician, and empty space and drawing the audience into the Kodo community. 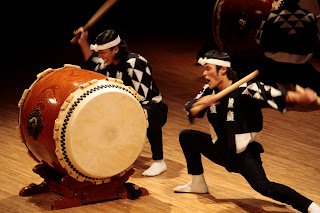 Island. "Sakaki," composed by Kodo member Masaru Tsuji, takes its name from a sacred tree used in Shinto purification rituals. Yet its origins are strictly Sado: the solo male dancer and the rhythms invoke Sado's Onidaiko (demon drumming) dances, when villagers in fearsome masks are transformed into dancing demons. With crimson jaws and wild flowing hair, dancers force misfortune to turn tail, protecting crops, animals, and families for the year to come.

Tsuji reframes this bold and colorful display as a pensive moment, a coming to stillness before the great burst of taiko energy. But he, like others in the younger generation of Kodo artists, learned the heart of the piece from Sado locals, instilling deeper trust and understanding between artistic newcomers to the community and salt-of-the-earth islanders. "Pieces like 'Sakaki' show our profound commitment to the island," explains Kodo member Jun Akimoto. "This dance piece is a token of thanks and appreciation from the younger generation of Kodo to the islanders who taught them traditional arts."

Kodo's uniquely intertwined communal life and commitment to art owes more than just this piece to Sado, an island the size of Okinawa off Japan's northwest coast. The island saw an influx of new inhabitants when gold was discovered during the Edo period, and saw several centuries of artists and intellectuals in exile, extraordinary men banished by Japan's rulers for political reasons. "Many cultures in turn came to Sado on thousands of ships from all over Japan. That made the island's culture very complex and interesting," explains Akimoto, who has worked with the group for over a decade.

In post-war Japan, Sado Island became a haven for artists seeking a different, more communal approach to creativity and tradition. The organic blend of cosmopolitan and folk, of new and old, makes Kodo's repertoire feel constantly fresh, even as the group has developed its own way of life, trained hundreds of 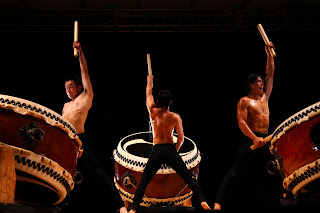 apprentices, built a remarkable arts village, and toured the world tirelessly for decades, setting the benchmark for all taiko that has followed since.

Yet relations between Sado Islanders and the newcomers were complicated at first, explains Akimoto: "Most of the Kodo members are from elsewhere, but we moved to Sado and live communally. For the first few years, some thought we were suspicious. We would run seven miles down the coast every morning, even in rain and snow. They thought this was crazy," he laughs. "Nowadays, they are more welcoming and try to have us as a part of the community."

This close tie to Sado doesn't mean Kodo only finds inspiration in Japanese traditions and forms. Several pieces new to North America-including "Sora" and "Stride"-show how taiko can find common ground between unexpected musical territories. Kodo composers draw on the Irish beats they heard on a European tour or the samba reggae that caught their ear in Northeastern Brazil. 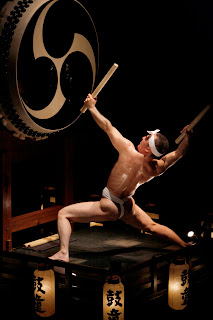 Kodo's unifying beat extends the global village of the drum to unsuspecting and skeptical listeners. A recent tour in Europe provided a vivid example. Kodo came to Naples, where they played the prestigious Real Teatro di San Carlo, the world's oldest continually operating opera house. The audience, decked out in formal attire, jewels, and furs, didn't quite know what to make of Kodo's unwavering energy. "During the first half, there was little applause. Nobody spoke, and there was total silence," Akimoto recalls. "But by intermission, we could tell they were getting excited. They eventually went crazy. I never thought that would happen. They eventually all stood up and applauded."

Kodo's percussive fireworks and unexpected lifestyle reflect the ancient, complex traditions of the Japanese drum-and how Kodo judiciously harnesses its power to create something more than music.

"The drum is a ritual tool in Japan, played whenever a community needed to come together. If you can hear the sound of the drum, that means you are part of the community," Akimoto recounts. "We would like to rephrase this story. If Kodo can bring drums and travel around the world and deliver the sound of drums there, we can unite the people who hear the sound and make them part of a community."