I had a chance to talk with comic John Hastings recently about his upcoming show in Toronto. After Toronto, his Yuk Yuk's tour takes him all over Ontario, and in February he'll be in London, England from the 2nd till You may know John Hastings as a Regular "Juror" on the 2010/2011 Season of Muchmusic’s highly successful series "Video On Trial". He was named as one of the 5 comedians to watch by the Comedy Network, and was one of the first Comedians signed to Canada’s first and only Stand-up Comedy Record Label: Comedy Records (featured on their debut release “Comedy Records Presents”). He's toured the country as a stand up comedian and brings his act to Toronto's Yuk Yuk's Comedy Club for a 5 day run.

His gift for stand up was in evidence from his childhood in Montreal. "I grew up fast," he says. "I was always a bad kid. You develop a way of talking back to bullies." 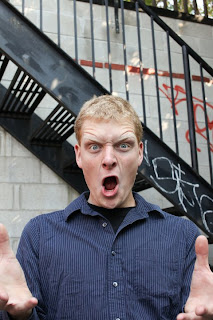 From talking back to bullies he went on to theatre school, stuck with the usual actor's dilemma of how to make a living. "Someone told me they heard of somebody who worked at a comedy club and got $25 for the night, and I thought Wow! That's more than I'll ever make for my 10 hours of rehearsals!" He describes his first gig. "I got paid $15 to talk into a karaoke machine in Verdun... and I've never looked back." The show included a dog and screaming kids in the audience - his first taste at life on the road. "It's a lot of performing for people who really don't want there to be a show," he remembers. Still, the volatile energy of performing before a live audience hooked him from the start. "It's intoxicating."

The preparations that lead up to a show are less appealing. "That's the most annoying part of it - sitting down to write something," he claims. "I always mean to write other things, but it always ends up coming back into the routine. It's comedy that's feeding me right now."

Annoying or not, his inventive sense of humour is often based on his own life and is writerly in its acute sense of observation. He tells stories that start out innocuously enough, then take detours, getting more and moretwisted and detailed. He contributes to mushypony.com and has written in a variety of other contexts, including for a morning radio show in Montreal for a year. The job involved writing reams of jokes in

advance for the DJs as well as on the fly as they were on the air. "I lost my short term memory. I was sleeping 5 hours a day," he recalls. It was an opportunity to learn how to write for a specific audience - in this case largely women over 40.

After a few years of building up both his show and his reputation, the upcoming stint downtown marks a definite signpost in a rising career. "It's the first time I'm headlining at Toronto's Yuk Yuk's. It's the largest comedy club in Canada.The biggest and the best of them have come through here," he says. "It's sort've a big deal. I've never been more excited."

They'll be taping the show for XM Radio. "It's a time capsule of the last 5 years of my career. Come and see what I hope is not a train wreck."

Here's a taste of his work: