on January 18, 2011
From a media release - take note of the free download detailed below: 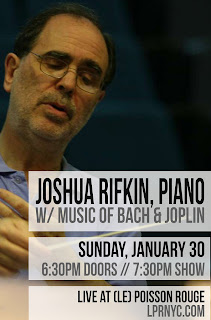 On January 30th Joshua Rifkin will make his debut at (Le) Poisson Rouge performing the music of kindred spirits J.S. Bach and Scott Joplin in celebration of the 40th anniversary of the album.

• Nonesuch has additionally made “Maple Leaf Rag” available as a free MP3 download through the LPR blog till January 30 only - it'll be taken down after that date.

About Joshua Rifkin:
Joshua Rifkin’s life in music has spanned Renaissance motets and ragtime masters, Bach cantatas and Baroque Beatles. He has conducted leading orchestras from Australia to Israel in music ranging from 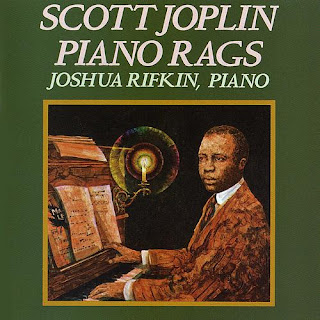 Mozart and Beethoven to Stravinsky, Copland, and the most recent moderns. The Bach Ensemble, which he founded in 1978, won England’s Gramophone Award for its Nonesuch recording of the Mass in B Minor and has performed this and many others of Bach’s works at festivals in the United States, Europe, and beyond; in December 2010 it joined La Petite Bande under Sigiswald Kuijken and the Taverner Consort and Players under Andrew Parrott for a “one to a part” Bach Christmas celebration in Leuven, Belgium. The University of Dortmund, Germany, has awarded Joshua Rifkin an honorary doctorate for his contributions to Bach interpretation.

Highlights of his work with modern orchestras include the Australian premiere of Weill’s Die sieben Todsünden; the European and Canadian premieres of Gunther Schuller’s And They All Played Ragtime; Bach’s St. Matthew Passion in the 1911 version of Ivor Atkins and Edward Elgar; and the posthumous premiere and first recording of Silvestre Revueltas’s theater music Este era un rey with the Camerata de las Américas of Mexico. In the 1970s, Joshua Rifkin’s Nonesuch recordings of Scott Joplin spearheaded the rediscovery of this fundamental American composer, and he has since played Joplin’s music in major concert halls throughout the world, in London’s Hyde Park, and at the White House. In 1990, his Decca/ London CD Rags and Tangos introduced many listeners to the works of Joplin’s great Brazilian contemporary Ernesto Nazareth; more recently still, commissioned broadcast performances in Europe have counterpointed Joplin with Bach and, in 2010, Chopin. His latest CD, Vivat Leo! Music for a Medici Pope with the Dutch-based vocal ensemble Cappella Pratensis (Challenge Classics), returns him for the first time in many years to the music of the Renaissance.