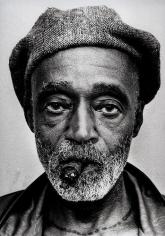 Melvin Van Peebles had such a good time working with Burnt Sugar the Arkestra Chamber bringing "Sweet Sweetback's Badasssss Song: The Hood Opera" to life on the Paris stage, that he decided to continue the collaboration.

When asked why the title, Melvin replied, "Why? ...'cause they're a crew of musicians who make shit happen and get shit done.  That's why!" The new show,"Yeah unhunH Sure ... The Rubber, ie. Your Behind, Meeting The Road, Do Jesus, Hand To Heaven Street Songs," will feature tunes taken from Melvin's Broadway shows, movies and recordings. 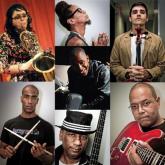 Here's a taste of Melvin and Burnt Sugar in action, rehearsing for that gig in Paris:

In 1971, Melvin Van Peebles directed and starred in one of the classics of African-American film. Now, with the group Burnt Sugar and a cast of more than a dozen, he workshops a new stage version, filled with Baadasssss songs.
• From Brooklyn Independent Television's Caught in the Act, episode 22.
• Original airdate: 1/27/2010.

• Between the hours of 11am and 5pm tickets can be purchased and dinner reservations can be made simultaneously by calling 212-539-8778.
• You may buy tickets in person at The Public Theater box office, located at 425 Lafayette Street from 1:00 pm to 6:00pm on Sundays and Mondays and 1:00pm to 7:30pm from Tuesday through Saturday.
• Tickets are also available for purchase in person at Joe's Pub from 6:00pm to 10:00pm, seven days a week.
funk hip hop Joe's Pub NYC laxative band live music new york city melvin van peebles. burnt sugar the arkestra chamber rnb soul spoken word in new york Sweet Sweetbacks Badasssss Song