The National Film Board at Canada's Top Ten

Canada's Top Ten screenings will take place at the TIFF Lightbox from January 20 to February 1. For a full list of the great films being shown, check the link.

Toronto, December 14, 2010 – The National Film Board of Canada is proud to announce the inclusion of two of its animated productions, Theodore Ushev’s Lipsett Diaries and Ann Marie Fleming’s I Was

a Child of Holocaust Survivors, in this year’s Canada’s Top Ten shorts program.

Established in 2001 by the Toronto International Film Festival, Canada’s Top Ten is an annual event celebrating and raising awareness of Canadian cinema. The Top Ten shorts are selected from among narrative, documentary, animation and experimental films by a national panel of filmmakers, programmers, journalists and industry professionals. Each film must have premiered at a major Canadian film festival in the relevant calendar year.

Lipsett Diaries is a descent into the maelstrom of anguish that tormented famed Canadian experimental filmmaker Arthur Lipsett, who died prematurely at the age of 49. Taking the form of a diary, this animated film by Montreal’s Theodore Ushev charts the pathways of psychological distress, with clashes of images

and sounds evoking the loneliness of the artist’s childhood, his frenzied creations and his dizzying descent into depression and madness. Drawing, as Lipsett did, from archives of diverse origins, and even recycling segments of Lipsett’s films, Ushev renews his aesthetic by using paint and crayon on paper, to which he applies digital treatments. The result is both spectacular and daring: a fragmented and fascinating short film that plunges us into the whirlwind of a mind out of balance. A collaboration between Ushev and Ottawa writer Chris   Robinson, Lipsett Diaries is a singular study of what happens when genius is on a first-name basis with madness.


I Was a Child of Holocaust Survivors is Vancouver director Ann Marie Fleming’s animatedadaptation of Bernice Eisenstein’s acclaimed illustrated memoir. Through an artful blend of Eisenstein’s 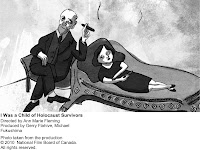 drawings, inventive animation and the author’s own voice, the film weaves together personal and collective history. Eisenstein explores how her own identity is coloured by a past that her parents, both Auschwitz survivors, don’t especially want to talk about. Using the healing power of humour, the film probes the taboos around a very particular second-hand trauma, 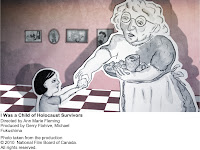 leading us to a more universal understanding of human experience. The film examines identity and loss through the audacious proposition that the Holocaust is addictive and defining. This is a poignant and wry exploration of grief and love, acceptance and resilience, and the enduring quality of family bonds.

Canada’s public film producer and distributor, the National Film Board of Canada creates social-issue documentaries, auteur animation, alternative drama and digital content that provide the world with a unique Canadian perspective. The NFB is expanding the vocabulary of 21st-century cinema and breaking

new ground in form and content through community filmmaking projects, cross-platform media, programs for emerging filmmakers, stereoscopic animation—and more. It works in collaboration with creative filmmakers, digital media creators and co-producers in every region of Canada, with Aboriginal and culturally diverse communities, as well as partners around the world. Since the NFB’s founding in 1939, it has created over 13,000 productions and won over 5,000 awards, including 12 Oscars and more than 90 Genies. The NFB’s new website features over 1,800 productions online, and its iPhone and iPad apps are among the most popular and talked-about downloads. Visit NFB.ca today and start watching.

PS - some of the other films screening at Canada's Top Ten include Barney's Version, Modra, Incendies and others you might find detailed on this blog.
ann marie fleming canadas top ten canadian film national film board of canada NFB theodore ushev tiff lightbox toronto film screening