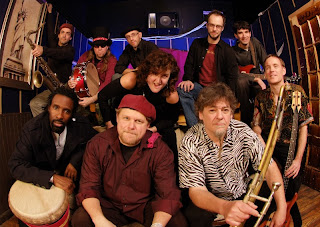 For Chopteeth, even a seeming straightforward live album became a deep exercise in tracing musical lineages. Over many sweaty gigs, the band honed a late Fela piece of fugue-like complexity (“Question Jam Answer”) and spent months calling Nigeria to find an unsung master of African funk. They dug through record store bins, trolled the internet, and mined the vinyl of die-hard African record buffs to find lo-fi and neglected gems.

These gems harken back to the golden age of African pop, the 1970s. In rough-and-ready studios, musicians laid down heady mixes of James Brown-inspired funk, complex chord changes, and local rhythms. They reacted to soul and rumba, to jazz and rock, to harsh political realities and deep roots. Though some musicians of this generation rose to international prominence, many languished, only recently rediscovered by dedicated African music fans, labels, and collectors.

Chopteeth’s discoveries, presented with passion on stage, point to several major figures, forgotten in the recent Fela craze on and off Broadway, who were instrumental in shaping what came to be known as Afrobeat. One striking example, Nigerian jazz player Peter King, had a show so hot back in the day that it rivaled even Fela’s own. Once celebrated, King receded from the international spotlight after his early 70s heyday.

Chopteeth loved King’s tune “Freedom Dance,” a funky vamp on a compelling jazz chord progression that was a blast to play live. When they captured a live version for the album, though, they knew they had to track King down. What began as a simple exercise in copyright clearance became a multi-continent hunt for the forgotten icon.

After a month’s worth of calls to Nigeria, Chopteeth bassist Robert Fox finally connected with King on the phone. “I told him who we were and that we wanted to do a version of his song, and to arrange permission and payment,” Fox recalls. “He was really cool about it. It was an honor for us, to get his blessing, and give him the due he deserves.”

The album gives many other artists their due, from Guinea (“Festival”) to Senegal (“Jiin Ma Jiin Ma”) to Congo (“Gagne Perdu”), showing the musical and geographic sweep that characterizes Chopteeth’s live shows. Their versatility and energy have won them a wildly devoted local fanbase—and garnered them six Wammies (the DC answer to the Grammies®), including Artist of the Year. Their debut studio CD Chopteeth helped build this following, thanks to trans-African originals that eclectically combined the wealth of African pop with upbeat lyrics in multiple languages. 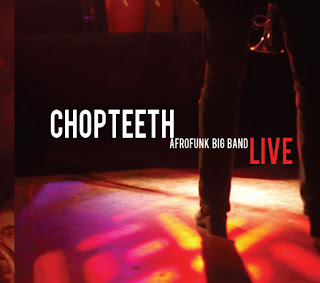 Two years went by, and it was time to capture the band’s live vibe, the heavy-duty intensity of a good old big band, something increasingly rare in this age of mp3s and streaming files. “The truth is people don’t often hear big bands playing dance music live anymore,” muses Fox. “You hear a song like Fela’s ‘J.J.D.’ in person, and it just feels different. It’s a shocking experience for the audience.”

The audience at the Duke Ellington Jazz Festival, for example, barely knew what hit them. The band decided to tackle a little-known Ellington tune, “Didjeridoo,” after they were invited to play at the DC celebration of its iconic native son.

Chopteeth had a unique take on the composition, created after Ellington toured Africa in the 60s as a musical ambassador. They had a feel for the musical roots that inspired the elegant piece. Trombonist Craig Considine whipped out his circular breathing chops to simulate the drone of a didjeridoo, while the group’s baritone sax player Trevor Specht stalked the piece’s elusive final note.

“There’s a low A note that some saxes get and some don’t,” explains Michael Shereikis with a laugh. “If your horn doesn’t go there, you can stuff something in the bell. Mark Gilbert, our tenor sax player, stuffed his big fist into the horn of the baritone sax to get that low note. They practiced in the dressing room and it worked. It made quite the impression on stage.”