Pistolera's accordion-driven melodies invite you to a dance party at the Brooklyn-Mexico border. Fans around the world are dancing cumbias to the group's socially conscious songs--en español--about 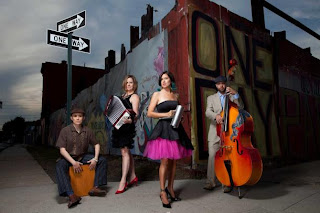 immigrants' rights, war, racism, feminism, and life on the border.

• Get tix online at joespub.com

Pistolera's two albums, Siempre Hay Salida (2006) and En Este Camino (2008), were produced by Grammy-winner Charlie Dos Santos. The band has toured in the U.S., Belgium, Holland, Portugal, and Mexico, and has shared the stage with Los Lobos, Lila Downs, The Mexican Institute of Sound, Kinky, Ely Guerra, Los Amigos Invisibles, Vieux Farka Toure, and Ozomatli, among others. Billboard Magazine said it was "...glorious and galvanzing. If this is homework, it gets and A."

"Pistolera melds the sass of indie rock with traditional Latin sounds to create compelling pop melodies, all of it sung entirely in Spanish." -Billboard Magazine

"...a foot-stomping sound that's one part ranchera and one part indie-pop." -The New Yorker

"Listening to Pistolera's self-released debut, "Siempre Hay Salida" ("There's Always a Way Out"), or watching lead singer and guitarist Sandra Lilia Velásquez stamp out a beat in her boots to bandmate Maria Elena's accordion melodies, you inevitably feel as though you've landed in the heart of Mexico. The blend of soulful ranchera, peppy cumbia, and Spanish lyrics evokes a feeling that's distinctly south of the border, yet not too far south."-The Boston Globe