Continues to February 12, 2011 at the Berkeley Street Theatre Downstairs

"You are very pretty - I can see how that would cause you problems." So says Mama Nadi (Yanna McIntosh) to Sophie (Sabryn Rock), one of her new charges at the brothel she keeps in the Congo bush. 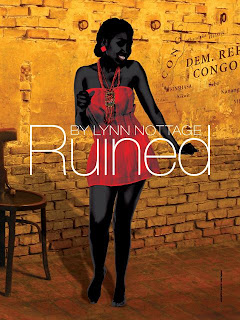 When we hear about the Congo (the Democratic Republic of Congo, formerly Zaire,) here in North America it's in the form of horrific headlines about faceless atrocities. Lynn Nottage's Pulitzer Prize winning play brings those headlines down to earth and gives them a face that feels entirely authentic in this powerful production.

A simple set conveys the cobbled together walls and corrugated tin roof of Mama's oasis of sex and booze in the middle of violent chaos. The women ply their trade in the midst of everyday brutality, catering to a stream of miners, government soldiers and the rebel forces they battle against with equal hospitality. "People come here to leave behind whatever mess they made out there," Mama says, and she walks a tightrope to see that it stays that way. "If you don't step on the dog's tail, it won't bite you."

The girls come to her via Christian (Sterling Jarvis), her supplier and the would-be lover she keeps at bay with a flinty sense of humour and uncompromising banter. Sophia comes with Salima (Sophia Walker), a young married woman who was abducted by soldiers and forced to be their maidservant and concubine for five months. She returned home only to find her husband cursing her and chasing her from their home because she had "dishonoured" them - she must have done something to provoke the abuse. She tries to adapt to life at Mama's, even though the clientele can only reinforce the pain. "Sometimes their hands are so full of rage, it hurts to be touched," she says.

Young Sophia has an even more tragic tale. She is "ruined" - what they call it when someone has been abused to the point where her sexual organs are permanently damaged. She was raped with a bayonet and left for dead, and also abandoned by her family. She can't work as a prostitute, and so sings in the bar and does bookkeeping, keeping the other girls entertained by reading from romance novels.

The peripheral details are equally as stark - child soldiers who rob you at the point of a kalishnikov on the way in, and a country that wallows in abject poverty at the same time it is veined with diamonds and gold. But yet there are moments of humour, and Mama's brand of hardboiled feminist empowerment may come as a real eye opener. Prostitution is, perhaps above all, a business of pragmatic souls.

There are several other characters who weave in and out of the central story of Mama and her girls, which include Josephine (Marci T. House), the hardened hooker who becomes a friend to Sophia. They try for business as usual in a world where allegiances shift constantly and the stark violence of the outside constantly threatens to spill in. The play really effectively conveys the torn fabric of a society, and the people simply trying to survive another day. 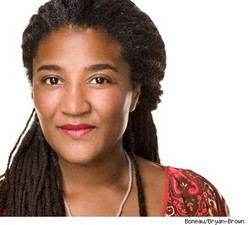 With these characters and this subject matter, the piece could easily sink under the weight of its own sense of tragedy. I credit the gifted insight of playwright Lynn Nottage (pictured) and the research she did with war survivors in Congo itself for investing the play with real people who elevate the dark material above the sum of its parts, along with a strong cast and production that was able to do the work justice.

In a way that's as hardheaded and as unsentimental as the character of Mama herself, Ruined delivers a theme about the irrepressible resilience of the human spirit.

Last night, the opening night house looked full and rose immediately to its feet for a standing ovation. See it if you can!