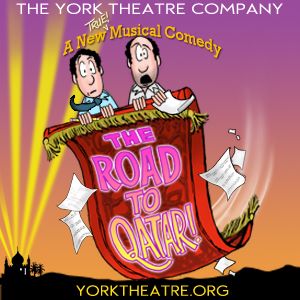 The Road to Qatar

THE ROAD TO QATAR! is a new true musical comedy about two American musical theatre writers commissioned to do the impossible - write a larger-than-life Broadway-style mega-musical for the Emir of Qatar including 100 actors, 40 camels, 17 fire-eating jugglers and Muhammad Ali. Surprises abound as the quirky self-professed "short Jewish writers" leave New York and begin trotting the globe.

What happens when two American musical theatre writers are commissioned by the Emir of Qatar to create the first American musical to premiere in the Middle East? Five years ago, Stephen Cole & David Krane each received an email that read: "We want you write musical. How much?" 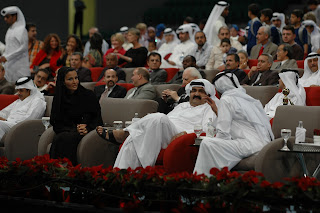 Thus began a truly unbelievable journey that introduced the two "short Jews" to an alien world of camels, "safari" rides in the desert, and Middle Eastern theatrical producers. During the course of this madcap adventure, Stephen & David starred in their own personal Bob Hope-Bing Crosby road picture that took them to Dubai, London, Bratislava, and ultimately to Qatar, where they presented an epic original musical for the Emir and 1000 of his closest friends. (The premiere is pictured.)

When they returned, they had no other choice but to write their story in the only way they knew how: AS A MUSICAL!! The names have been changed to protect the innocent...but the story is TOTALLY TRUE!!!

JAMES BEAMAN (Michael) is thrilled to make his York debut! Recent credits include Annie Get Your Gun and How to Succeed... at Goodspeed Opera House. James played Sir Robin for two years in the First National Tour of Monty Python's Spamalot. Visit James, and his popular blog, at www.jamesbeaman.com. 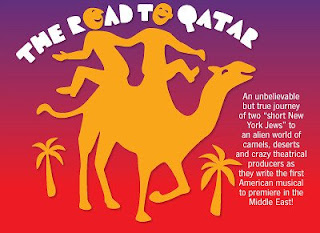 KEITH GERCHAK (Jeffrey) The great-grandson of Russian Jewish vaudevillians, Keith started performing in 2nd grade, standing on a milk crate during recess and singing two songs his mother taught him, "High Hopes" and "Does Your Chewing Gum Lose its Flavor on the Bedpost Overnight?" TV: "The Middle" and "House MD."

SARAH STILES (Nazirah) comes directly from New World Stages where she reprised the Kate/Lucy role in Avenue Q, after playing the role in the Broadway company in 2008 and 2009. Broadway/First National Tour: Logainne in The 25th Annual Putnam County Spelling Bee.

BRUCE WARREN (Farid) is pumped to reprise the roles he originated in the Lyric Stage world premiere of The Road to Qatar! NYC: The Wizard of Oz at MSG, Crazy Head Space, Treasure Island, Civil War Voices. National Tours: The Wizard of Oz, Cats (25th Anniversary), Oklahoma! (First National) and A Christmas Carol. 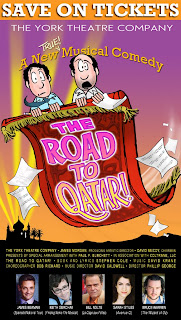 The York loves its students and seniors! For students, we offer rush prices without the rush. Student tickets are only $20 to all weekday performances and $30 to all weekend performances‚ regardless of purchase date. For seniors‚ we offer “senior rush.” Simply show up one hour before the performance you wish to see, and as long as there are tickets available‚ we’ll sell you a ticket for just $20.
david krane musical comedy musical theatre new york theatre premiere off-broadway musical road to qatar musical stephen cole york theatre