THE JOYCE THEATER HEATS UP THE NEW YEAR WITH
TANGO INFERNO
JANUARY 11–23, 2011
The Joyce Theater
(175 Eighth Avenue at 19th Street)

The Joyce Theater is proud to present an evening of seductively sizzling tango by some of the finest and most exquisite dancers performing today with Tango Inferno. The new production is poised to set the city 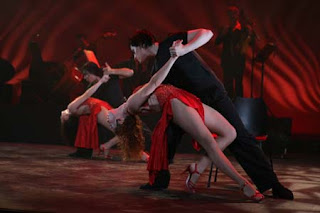 Acclaimed Argentinean dancer and choreographer Yanina Fajar – whose work was last seen at The Joyce in the 2007 sold-out production entitled Tango Fire – returns to New York City with Tango Inferno to heat things up for the start of 2011. 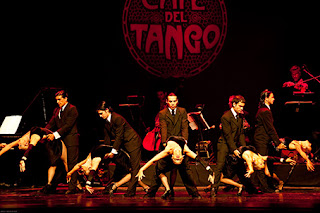 Accompanied by the live music of world-renowned tango band Quatrotango, the company’s ten brilliant dancers trace the evolution of tango from its origins in Buenos Aires’ red-light district to today’s dance halls and ballrooms, embodying the excitement and heated passion of this spirited Argentine art form.

PRE-PERFORMANCE TANGO!
Thirty minutes before each Tango Inferno performance, audience members will have the opportunity to practice their own tango moves on the Joyce stage for a pre-performance milonga. With origins in Argentina’s underworld of bars and brothels, a milonga is a place or an event where tango is danced. Audience members are encouraged to bring dancing shoes (no stilettos) and begin the evening by participating in this on-stage milonga.

YANINA FAJAR (Director of Choreography): Born in Pergamino, Provincal Buenos Aires Argentina, Yanina Fajar began dancing at the age of six. In 1994, she graduated from Fracassi Conservatory as a teacher of Arabian, Spanish and Argentine Folklore Dance. She founded the first official Ballet Dance School in Pergamino Argentina in 2009, and has toured internationally since. 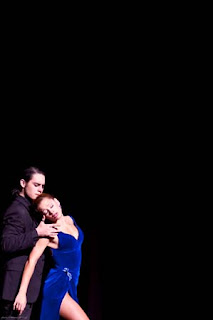 GERMAN CORNEJO (Assistant Choreographer): At ten years old, German Cornejo began studying tango in his hometown of Zárate, Buenos Aires. By fifteen, he had obtained a degree from Gatell Conservatory of Dance. In the following years, Cornejo broadened his skills by studying classical and contemporary ballet, jazz and acrobatic techniques, and qualified as a Master of Choreographic Composition at the National Institute of Arts. Cornejo is regarded as one of the best teachers of Show Tango in Buenos Aires, with many of his students reaching top positions in the finals in the Tango World Cup in 2006, 2007, 2008 and 2009.

QUATROTANGO (Band): Quatrotango was created in mid-2000 as a duet with Gabriel Clenar on Bandoneon (an accordion-like instrument popular in Argentina and Uruguay) and Hugo Satorre on piano. In 2002, violinist Marcelo Rebuffi joined the group, and the present line-up came together in 2005 with double bass player Gerardo Scaglione. With its robust repertoire of traditional and modern tango music, Quatrotango performs regularly at some of Bueno Aires’ most prestigious milongas, including Salon Canning, La Ideal, La Catedral, Cochabamba and La Calesita, and has toured throughout Europe, Australia, the United States, the UK, Singapore, and South Africa. In Argentina, the group also played at the Club del Vino, Nothorious-Gandhi, Radio Nacional, and in the VI Buenos Aires Tango Festival, organized by the Culture Secretary of the Buenos Aires city government. Since 2005, the band has toured exclusively with the Tango Fire company.
Photos © lorenzo di nozzi