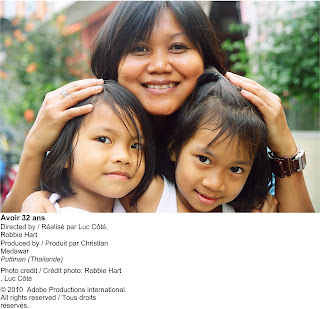 Toronto, Ontario, January 20, 2011 – The National Film Board of Canada documentary Turning 32, a sequel to the 1992 television series Turning 16, will have a Toronto theatrical engagement February 4 to February 10 at the NFB Mediatheque. Produced by Adobe Productions International in co-production with the NFB, this powerful film revisits the subjects of the TV series 16 years later and explores two universal themes: the journey to adulthood and the role of family. Co-director Robbie Hart will be in attendance for a Q&A following the screenings on February 4 and 5, while Turning 32 participant JR Messam, whose birth was captured in Turning 16, will attend on February 8. 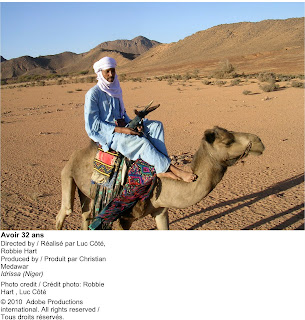 About the film
What characteristics do we have in common despite our cultural, geographic and economic differences? Filmmakers Robbie Hart and Luc Côté travelled the globe to explore this intriguing question, encountering an extraordinary group of men and women, all in their early thirties. The result of their journey is Turning 32, a feature documentary that transcends borders and offers a compassionate look at growing up around the world.

Back in 1992, Hart and Côté interviewed thousands of teenagers from Jamaica, Brazil, Thailand, Niger and India as part of the research phase of their documentary series Turning 16. From that group, five teens, one from each country, were chosen to be the main characters. The filmmakers delved into the stories, challenges and dreams of these young people and asked them to envision their lives at age 32. The series was nominated for four Gémeaux, garnered numerous international awards and has been distributed in over 50 countries. 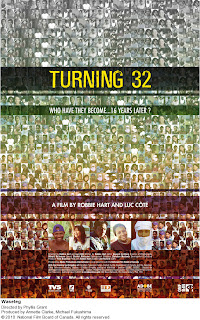 In 2008, exactly 16 years later, Turning 32 picks up where the documentary series left off. Rosie, Pintinho, Puttinan, Idrissa and Sonam recount the events that have marked their lives since we last saw them. We revisit their teenage dreams, see who they’ve become and discover how their worlds have evolved. Turning 32 is a touching and hopeful film that travels across the globe and over time to provide a captivating portrait of five very distinct people.

Robbie Hart – Director
President and founder of Adobe Productions International, Robbie Hart is a veteran filmmaker who has been making documentaries since 1986, often alongside Luc Côté. He has shot over 50 films, including many social portraits such as Nos amours: The Saga of the Montreal Expos. With Luc Côté, he co-authored the documentary series Turning 16 (winner of the Japan Prize) and Rainmakers. Many of his works and productions have garnered awards at the Prix Gémeaux and such festivals as Hot Docs, Chicago International, Banff Mountain, NHK and the North-South Media Festival.

Luc Côté – Director
Documentary filmmaker and producer Luc Côté has been making films since he was 14. For the past 35 years, he has travelled extensively making social documentaries. In the early 1980s, he founded the New York production company On Track Video and later teamed up with Robbie Hart in Montreal to launch Adobe Productions. His film Crash Landing, on post-traumatic stress disorder, picked up an award at the Hot Docs Festival in 2005. With Patricio Henríquez, he recently co-directed You Don’t Like the Truth: 4 Days Inside Guantánamo, which employs a surveillance camera aesthetic to reveal the initial interrogations of Omar Khadr.

About the NFB Mediatheque
The NFB Mediatheque is a one-of-a-kind multimedia facility in the heart of Toronto’s Entertainment District, a centre for media literacy and a public access point for films from the NFB and around the world. We offer over 5,000 NFB titles on digital viewing stations, screenings of great films in our theatre, educational workshops, special events and a boutique with NFB DVDs to buy or rent.