Year of the Rabbit - Rabbits in Film 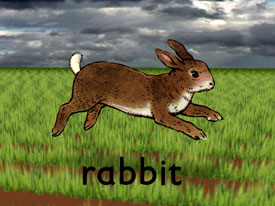 I did a similar piece last year for the Year of the Tiger, and I while tigers, I couldn't help but notice, are only depicted as ferocious, noble beasts, rabbits are used, apparently, for one of two things: comedy and surrealism. In some odd way, they seem to stand in for us all, vulnerable, sympathetic, weird.... easily killed yet slyly sinister at times too.

Here's a look at some of the memorable rabbits in film.

Bugs Bunny
Those of us in my generation of North Americans had the disconcerting experience of realizing our cartoon heroes were racists and gleefully so. Still... Bugs also introduced me to the world of classical European music in a way that my parents earnest efforts couldn't match.

One of my favourites has to be his rendition of The Barber of Seville.

The Killer Bunny
Cute, you say? Fluffy and gentle? Not this oryctolagus cuniculus from Monty's Python's the Holy Grail.

Roger Rabbit
This 1988 film is one of my favourite renditions of the rabbit in film.

So much for comedy... here comes the weirdness.

First, there's David Lynch's Rabbits (2002). "In a nameless city deluged by a continuous rain... three rabbits live with a fearful mystery". The short film is an arcane ode to old school sitcoms and anthropomorphic rabbits, and features a cast that includes Naomi Watts.

Have a look here.

He features the characters and some segments from it in his 2006 film, Inland Empire.

Rabbit is the simple and to the point name of an animated short from the U.K. Check it out - part primary reader, part journey into the heart of darkness.

Finally, from classic literature, we have the March Hare from Lewis Carroll's immortal Alice in Wonderland, given a recent update in 2010 by Tim Burton.