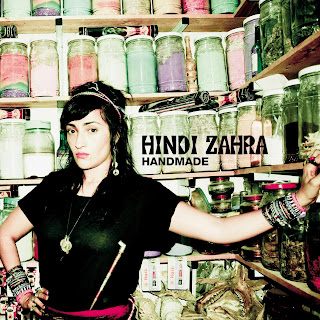 Moroccan-born, Paris-based Hindi Zahra can speak to mountains or whisper in your ear. She can turn rustling plastic bags into Berber beats and Parisian kitchens into soul incubators. Playfully savoring East and West, she writes infectious and hip songs, plays any instrument she can get her hands on, and records her own voice in the middle of the night to capture that perfect spark of intimacy.

Hindi's spontaneous yet long-honed debut, Handmade, bursts with maturity and vigor, rich in jazz, soul, and Arabic sounds but with a gritty, bluesy Berber pulse. "I wanted a space where I could break all the barriers, where I could put all the music I knew and loved together. Where I could mix it all," Hindi explains.

Hindi grew up in southwest Morocco improvising melodies at her relatives' urging; singing along with Egyptian hits on the radio; and drawing inspiration from her hardworking father and the rugged ranges and verdant valleys surrounding her village. For the young Hindi, natural beauty was about more than aesthetics. The places around her were filled with spirits, and the mountains reminded her of "plump and generous old ladies," she recalls fondly. They became her first audience, as she sang to them. 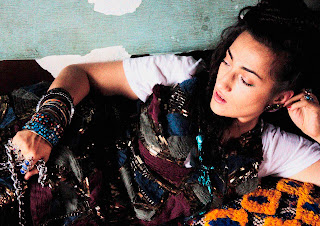 With a singer and actress for a mother and uncles who loved to jam on guitars and percussion, Hindi found her own voice early. "I had to go to my room, close the door, and practice making up melodies on my own," Hindi explains. "I had to be alone, with only my voice."

Surrounded by English-language music, she savored the Beatles, Jimi Hendrix, and Bob Marley, whose revolutionary spirit had a powerful impact on young Moroccans. Rock and reggae intertwined with the bluesy Berber and swirling Arabic melodies that made up her heritage-her paternal grandfather was a respected musician and dancer.

Yet a major music revelation struck when Hindi heard nimble jazz divas like Ella Fitzgerald and talented but neglected Peruvian singer, Yma Sumac. "I was really shocked by this music. The melodies felt like something from the East," Hindi remembers. "How could that happen, I asked myself. When I heard jazz, I started to sing in English, but mix in Arabic and Berber melodies. It was a game at first, to associate things that didn't fit. But jazz revealed to me that they can go together."

Hindi's experience mixing East and West deepened when she moved to France as a young teenager, at her father's insistence, to pursue her education. By age 17, she had dropped out, taking a job as a guard at the Louvre. When she wasn't studying the paintings (Hindi is also an painter whose exuberant work appears in the CD booklet), she sang. "I was singing in the big rooms in the Louvre," she recounts. "Some days there wasn't anybody around but we still had to guard the objects. I would practice with that big reverb, that big sound, and art all around." 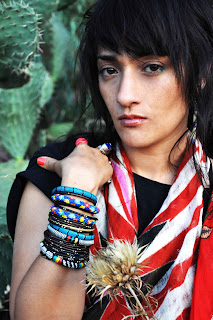 Other sounds-particularly American funk and hip hop-also began to seep into Hindi's voice, which can move easily between soul-inflected purrs and growls, and a gentle, clear resonance. For a decade, Hindi worked with French R&B and hip-hop artists, studied operatic and jazz voice, and played with Parisian Middle Eastern groups. But none of it felt quite right.

"I was frustrated. I was playing in jazz clubs and I think it was a bit odd for them. I didn't want to do covers; I wanted to improvise and use my Arabic influences. But I started to lose friends," she reflects. "So I went to meet people doing hip hop. It was the same. I wasn't into the samples. I went to the Arabic scene. But it was the same again. Those boxes didn't interest me. I wanted to do my music."

Hindi began to fantasize about recording not in the sterile studio environments she saw as a back-up singer, but in a place "where I could make food and really live." Her moment came after a few intense sessions with long-time collaborator Romain Vaugeois at his home studio, which resulted in "Beautiful Tango," a sweet, folksy ballad that sways between darkened club and sunny shore. It became an unexpected hit that earned her both critical praise and the resources to make a debut album her way."

One of the biggest challenges for me has been as a producer," she muses. "Most producers in France are men, and they have ideas they want you to conform to. I had my own vision." This vision involved renting a two-story apartment/studio, where Hindi ate, slept, and recorded late into the night. "I took three weeks just getting used to the space," she recalls. "I wanted to feel the spirit of the place." The spirit wove itself into tracks like "Trying," which uses passing police sirens, and in the sighing of a water heater in the kitchen.

The improvised, handcrafted feel reverberates throughout Handmade, giving the album an open, organic, up-close quality. It shines through on tracks like "Set Me Free," which sounds like Erykah Badu and early Tina Turner shimmying their way over the Atlas Mountains. The layered percussion includes a performance by Hindi's inventive mom, who suggested they use plastic bags to get just the right sound.

Hindi shifts merrily between Berber and English, between an American vibe and Moroccan soul.  "For 'Oursoul' (Bygones) and 'Imik si mik' (Little by Little), Romain, who's a big fan of Neil Young, came up with a melody. I didn't know Young's music at all, but I thought if I sang in English, the song wouldn't be a game for me. Music has to be a game when you can discover something new," Hindi notes. "I started to think how would Berber would sound with American folk music. And I started to improvise."

Though playfulness and sweetness abound in Hindi's songs, she still keeps a strong sense of the spirits she felt as a young child, of the power of music itself (she even dedicates a driving, hypnotic track to it, simply titled "Music"). "Maybe it sounds a little romantic or naïve, but music has guided my life," Hindi smiles. "It gave me energy, reflections, and meditations. It made life easier. Singing brought me peace." 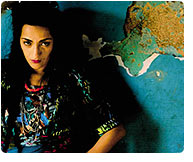