Grace, Milly, Lucy...Child Soldiers
A film by Raymonde Provencher, produced by Macumba DOC Productions in co-production with the NFB
Screening at the Royal Cinema, Toronto on February 12, 5pm
and February 13 to 19 at the NFB's Mediatheque 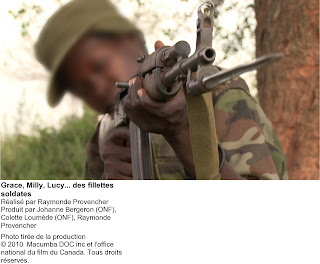 “It’s very easy to create a killing machine. Just imagine. You’re seven years old and taken away from your family…your parents are killed in front of you or you’re forced to kill somebody. Through all that you’re beaten…then you’re given a gun and you’re told, ‘This gun is your life.’” – Grace Akallo

Supported by the International Bureau for Children’s Rights, the film’s release is timed to coincide with the International Day Against the Use of Child Soldiers, which each year denounces the use of children in armed conflicts. A number of events aimed at raising awareness of this issue are also planned for the occasion. The film will screen concurrently in Montreal, Quebec City and Vancouver.  The promotion of these screenings is made in collaboration with War Child Canada.

A representative from the International Bureau for Children’s Rights (IBCR) will introduce the film and lead a discussion on Saturday, February 12 at the Royal Theatre (theroyal.to).

At the NFB Mediatheque, representatives from Amnesty International Canada, the IBCR and Plan Canada will be on hand after the screening on February 13 to lead a discussion. The February 15 screening is co-presented by the Ontario Black History Society, and Dr. Opiyo Oloya, a weekly columnist for Uganda’s national newspaper, the New Vision, will be in attendance. A representative from Amnesty International Canada will also lead a discussion after the screening on February 17.

THE FILM
In the last 20 years, more than 30,000 Ugandan children have been abducted and forced into armed combat in the war between the Lord’s Resistance Army (LRA) rebel forces and government troops. Of these children (who account for 80% of the LRA’s recruits), approximately one third are girls. This little-known reality is examined in Grace, Milly, Lucy  . . . Child Soldiers. Returning from captivity, girls who were trained to kill and often forced to “marry” their captors must readjust to life in the community. For some, life becomes a struggle to make their voices heard. Combining personal accounts and scenes from daily life, the film probes their journeys on the long road to reconciliation. Though it conjures up the stifled 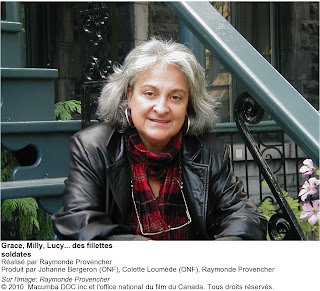 echoes of a painful past, Grace, Milly, Lucy . . . Child Soldiers dares to believe that a better future is at hand for these women, united in a common struggle. Produced by Macumba DOC production in co-production with the NFB.

ABOUT THE DIRECTOR
With a degree in political science and a longstanding interest in current events, Raymonde Provencher has a passion for international issues. Her films War Babies (2002, winner of several Gémeaux awards), Blue Helmets: Peace and Dishonour (2007) and A Senseless Death (2008) throw the harrowing tales of women victims of war crimes into sharp relief. Grace, Milly, Lucy . . . Child Soldiers breaks the silence surrounding the fate of a sacrificed generation.