on February 12, 2011
From a release - I love this quartet and Tich's upbeat, mellifluous polyrhythmic music - I may see you there on Friday: 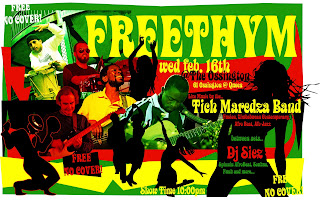 He lists his influences as Oliver Mtukudzi and Thomas Mapfumo, has opened for the former, and plays acoustic guitar, drums, keyboards, mbira, marimba and percussion in a fusion of Zimbabwean contemporary rhythms and Afrojazz. You can catch him playing in town twice this week. 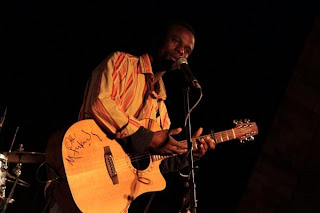 Swooping down from the vast Zimbabwean plains, Tich Maredza, a guitar in one hand, a drum in the other and an mbira in his teeth, arrived in Toronto in 2008. Singer, multi-instrumentalist, composer, he quickly formed a group. Tich's music, while rooted in Zimbabwean traditional styles, has a contemporary flair. A drummer/guitarist, Tich's compositions have rhythmic drive, melodic intelligence, and lyrical messages of challenge and hope. Indoors, outdoors, concert hall or dance hall, The Tich Maredza Band puts smiles on faces and feet on the floor.
The band is: 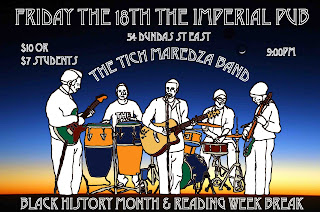 Check them out live from a show last December: