on February 05, 2011
From a media release - I too, have been driven mad by bureaucracy - note the Gala info at the bottom:

The Diary of a Madman
Part of the 2011 Spring Season 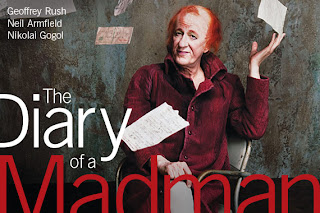 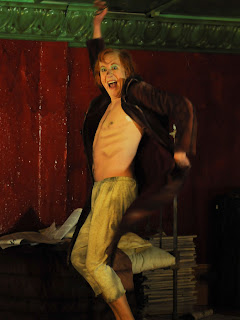 A burnt-out paper-pusher who ekes out a meager living in czarist St. Petersburg, Poprischin spends his days doing menial tasks, anxious and teetering on the brink of lunacy. Or is it lucidity? Immobilized by a rigid social hierarchy, Poprischin cuts adrift from reality: hallucinating a canine love affair, imagining himself well above his station, and conjuring entire realms both incredible and terrifying. Deeper and deeper he sinks into delusion, and—thanks to Rush’s astonishing performance—we, too, are eventually subsumed by a world in which reality is, at best, relative. 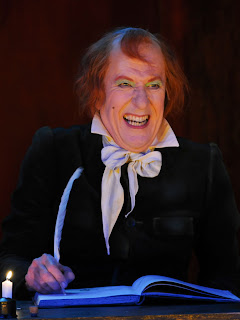 Join us for another spectacular BAM Theater Gala to celebrate The Diary of a Madman from Australia’s acclaimed theater company, Belvoir. The evening begins at 6pm with The Russian Banquet Dinner on the stage of the BAM Howard Gilman Opera House followed by an 8pm benefit performance of Madman featuring renowned actor Geoffrey Rush. Immediately following the play, attendees are invited to partake in the Samovars & Sweets Dessert Party with the cast. Space is limited so reserve early.

Gala tickets start at $1,200. A select number of tickets for the performance (gallery seating) and Dessert Party are available for $150 per person. All proceeds benefit BAM. Please call BAM Patron Services at 718.636.4182 to purchase tickets or for further information.