Recently described as "A bar of gold in the new depression" by Hilton Als in the New Yorker, singer, 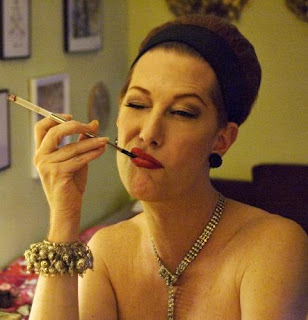 songwriter and Tony-nominated performance artist Justin Bond is an Obie, Bessie and Ethyl Eichelberger Award winner and was named one of the top 40 favorite New Yorkers by Time Out New York and was listed by Time Out London as one of England's 50 Funniest People.

His debut EP Pink Slip was released in July 2009. In 2008, he won rave reviews for his GLAAD nominated show Lustre which premiered at PS122 in the East Village and then went on to tour the UK with stops in Manchester, England as part of the It's Queer Up North Arts Festival and in a critically acclaimed run at London's Soho Theatre. Also in 2008, Justin appeared at The Southbank Center in London in the title role of Sinderella an original musical written by Martyn Jacques of The Tiger Lillies.

In 2007, he premiered Justin Bond is Close To You, a reinterpretation of the classic Carpenter's album Close To You performed in its entirety as part of Joe's Pub in the Park in Central Park and subsequently presented by The Sydney Opera House in Australia. He regularly Emcees the performance series Weimar New York which has played in such varied locations as the SFMOMA, The Speigeltent, and Joe's Pub at the Public Theater in New York.

Film credits include a starring role in John Cameron Mitchell's feature Shortbus, Charles Hermann-Wurmfeld's Fancy's Persuasion as well as Imaginary Heroes and Jon Moritsugu's Mod Fuck Explosion. In 2006 Bond completed his MA Scenography at Central St. Martins College of Art and Design in London. Justin credits his career as a queer performer to Kate Bornstein who cast him as Herculine Barbin in her ground-breaking play Hidden: A Gender in 1991.