on February 02, 2011
From a media release - I'm really looking forward to this piece! 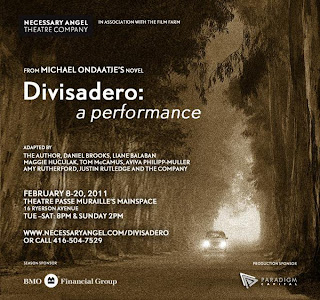 Collaborating with Brooks and Ondaatje on Divisadero: a performance are Liane Balaban, Maggie Huculak, Tom McCamus, Amy Rutherford, Justin Rutledge - the Juno-nominated musician who has created music specifically for this piece - and designers Andrea Lundy, Alexander MacSween and John Thompson.

Divisadero: a performance tells a story of a family that is forever changed by a single, violent event, and examines themes of memory, identity, love and the grip of the past on the present.  The production combines music, performance and story-telling, exploring the intimacy between the speaker and the listener, and language's ability to weave a magical spell.

Necessary Angel welcomes Ondaatje's return to the stage with his first full-length play in over two decades since he co-adapted his novel Coming Through Slaughter with the company for its presentation at the Silver Dollar Tavern in 1989. Divisadero: a performance was performed last fall in a series of sold-out workshop presentations under the working title When My Name Was Anna.

Michael Ondaatje is one of Canada's leading novelists and poets. Best known for The English Patient, he has won the Governor-General's award four times as well as the Booker Prize, the Giller Prize and the Prix Medics. He was named to the Order of Canada in 1988.

Daniel Brooks, Artistic Director of Necessary Angel since 2003, is a prolific and versatile artist whose innovation and risk-taking have made him a leader within the Canadian cultural landscape. He has been recognized with accolades and awards throughout Canada and around the world including the inaugural Elinore and Lou Siminovitch Prize in Theatre. 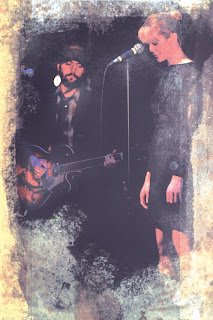 THE FILM FARM (Simone Urdl & Jennifer Weiss) has been producing quality films, fueling imaginations and cultivating original voices for over a decade. With an eclectic and award-winning slate of over 20 narrative feature films, short films and film-based projects, their credits include Atom Egoyan's last two features Adoration and Chloe; Brian De Palma's Redacted; Sarah Polley's debut feature film Away From Her; Sook-Yin Lee's Year of the Carnivore and Mike Goldbach's Daydream Nation.

*JUSTIN RUTLEDGE  has just been nominated for 2011 Juno Award!

Justin Rutledge's newest album, The Early Widows (from Six Shooter*Warner), has been nominated for a 2011 Juno Award in the Roots & Traditional Album of the Year: Solo category.

The Toronto-based singer-songwriter makes his theatrical debut in Necessary Angel's Divisadero: a performance, and the songs that appear on The Early Widows were inspired by Michael Ondaatje's Governor General's Award-winning novel of the same name Divisadero. Rutledge performs "Jack of Diamonds" from it in Divisadero: a performance, along with several other of his songs including "I'm Gonna Die (One Sunny Day)" from the album The Devil On A Bench In Stanley Park and "Lay Me Down Sweet Jesus" from No Never Alone.