New Work by Artist Travis Shilling at the Gladstone, Toronto to March 26 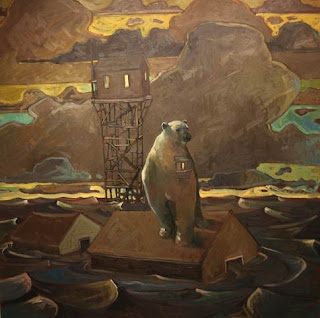 How to drown a fish
Extraordinary new work by
Travis Shilling
on view until 26 March 2011
The Gladstone Hotel, Toronto

Travis Shilling is a paint chronicler. He captures the hidden in the visible – after-effects and fall-outs from events real and imagined. Travis’ series, How to drown a fish, marks out territories of disaster and survival. Asking how one drowns a fish is asking the impossible because human and animal alike adapt to inner and outer hardship. Still, people try to drown a fish every day, through damaging the environment or self-destruction. Travis' work reflects a rich imagination and exceptional skill. These paintings juxtapose civilization and the animal world in a narrative dreamscape.

Travis was born in Rama, Ontario. He is the second of two artist sons of acclaimed Aboriginal artist Arthur Shilling. Travis has exhibited in Canada, Europe and the U.S. He travels between studios in Rama and Toronto. 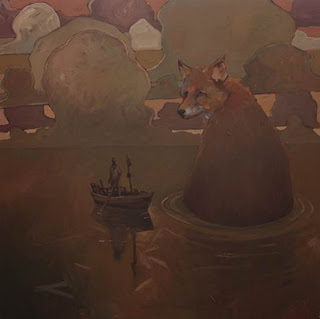 How to drown a fish is presented by the Association for Native Development in the Performing and Visual Arts (ANDPVA), Canada's oldest Indigenous arts service organization promoting, supporting, and presenting Indigenous arts.