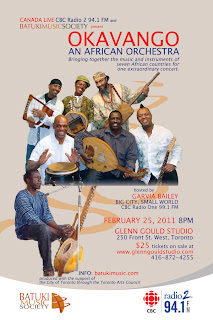 The orchestra takes its name from the Okavango Delta, a basin in the Kalahari Desert in Botswana, where many different animal species come together to feed and find water. Predators and prey are forced to coexist and share the meager resources because of the harsh environment around them. Similarly, Okavango: An African Orchestra brings together the traditional music and instruments of several major African cultures that historically have had little or no interaction. The musicians of Okavango have created a common meeting place for these disparate cultures, and a new musical language that harmonizes their different tuning systems, rhythms, and timbres. The multicultural spirit of modern-day Canada bridges ancient African solitudes. 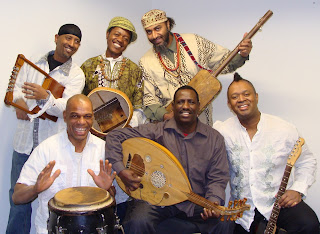 The concert program will feature 5 traditional songs from the various African musical cultures represented, plus the world premiere of Okavango: A Conversation with the Spirits: a suite of 5 new, CBC Radio-commissioned pieces by members of Okavango: An African Orchestra.

The concert is hosted by Garvia Bailey of Big City Small World on Radio 1 and presented in association with community partner Small World Music.