Melora Creager recorded it whilst pregnant in the Hudson Valley just last summer. She and Brian Kehew (Moog Cookbook, Fiona Apple, Air) mixed it in Los Angeles with a newborn in the studio.

This album finds Melora expressing a thematic fantasy of Colonial Federalism. Subject-wise, she also touches on feral children (Snow-Hen of Austerlitz), the Anti-rent Wars of 1844 (Calico Indians), and Early American portraiture (The 2 Miss Leavens), not to mention the theory that giants were indeed real, but killed each other off in a self-genocidal holocaust (A Holocaust of Giants).

Sister Kinderhook is a return to Rasputina's early, more organic sound. Melora produced and engineered the thing at her homestead in the country. Hudson, NY is home to many fabulous female artists that gained notoriety in the 1990's, including Melora, Melissa Auf Der Maur and M'Shell N'Degeocello.

In addition to voice and cello, Melora played banjo and harpsichord.

For the first time, Rasputina employs a male cellist. Daniel DeJesus came of age listening obsessively to Rasputina records, and can play and sing the entire catalog.

Melissa Bell was a local punk-rock teenager. Melora thought, "If I put her behind an eccentric kit that included a concert bass drum, a djembe and ankle bells, and if she played her simple but cool punk-rock beats, we might really have something." When the internet compared Melissa to a "Native American drum machine", Melora knew that experiment was successful.

Melora has maintained the Rasputina group for almost 20(0) years. Genres come and go and Rasputina often gets mistakenly lumped into passing fancies, but Rasputina manages to survive and defy categorization by maintaining a child-like delight in music-making alongside a clear & true integrity. 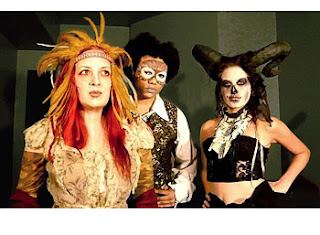 Melora grew up in Kansas in a musical family which did play together as an ensemble, though certainly not publicly. At 18 she moved to NYC where she studied photography at Parsons School of Design. While there, she began playing the cello with drag performers and eventually the 4AD band, Ultra Vivid Scene. That exposure to the glamorous world of professional rock music led her to begin Rasputina. She thought it would be easy. Touring as Nirvana's cellist taught her lessons in avoidance of immense fame, which she has successfully practised since.

Rasputina made 2 albums for Columbia/Sony (Thanks for the Ether, How We Quite the Forest), 2 albums for Instinct Records (Cabin Fever!, Frustration Plantation) and one previous (Oh Perilous World) on her own Filthy Bonnet Recording Co. label.