Divisadero: a performance should be taken at its word. This is a literary work in performance mode, fat 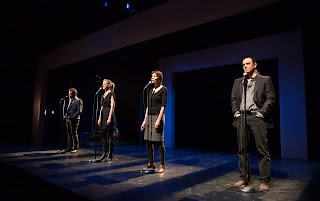 with words and a love of language and lit up by a great sense of storytelling that emerges from the voices of the performers.  The staging is minimalist, with a kind of false curtain at the back for entrances and exits, a couple of peripheral seating areas sketched out at either side of the stage, and four microphones that take up the foreground. There are bits of action here and there, but the majority of the piece unfolds at those four mics and in the tumultuous family history that unravels in the flow of words.

I haven't read the eponymous book (not all of it, not yet) but it wasn't necessary to follow the storyline or get caught up in its twists and turns. It begins with Anna and Claire, young women brought up together by 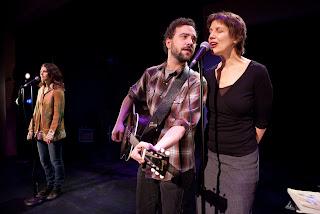 The story continues in a fragmented kind of form, with Coop at the centre, more often talked about than speaking for himself. He remains an only partly-known object of longing and desire, sometimes singing, sometimes playing the guitar in the background, where we delve much more deeply into Anna and even 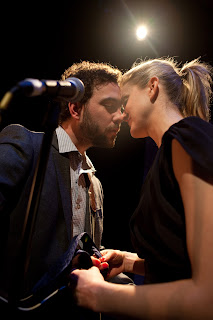 Claire. I'd be interested how the novel treats these shifts in point of view and depth of characterization. While I wouldn't call any of the performances weak per se, the story was at its most visceral and alive in the characters of druggy Bridget (Amy Rutherford) as Coop's Achilles heel, and in Tom McCamus, who's a born storyteller with a larger than life presence as the gambler Mancini. He held the audience in the palm of his hand with his yarn about Coop and the great con he pulls in Vegas.

The piece tackles themes of love and desire, loss and separation, and the lifetime of ripples that flow from a single violent episode. The random violence of the story comes across as somewhat removed, as it would in a talky piece like this, related from the memory of the characters and not from a direct point of view; one of the origins of the word "Divisadero" comes from the Spanish Divisar, meaning "to gaze from a distance", or "a point from which you can look far into the distance" - the writer's point of view. The one real quibble I'd have is with the reiteration of certain ideas and scenes retold in the story, a literary device that has a certain effect on the page that I don't think translates as well to the stage, but it's not a constant element and didn't detract in my enjoyment of the piece. I was engrossed in the story right up to its melancholy conclusion.

Just a note - please don't be like the boorish gentleman to my left, who insisted on yakking throughout the final monologue. Most of us really do want to hear every word. 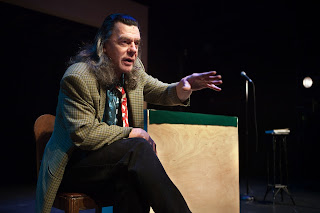