In the war-torn region of Southern Sudan, Emmanuel Jal was born into the life of a child soldier. Through 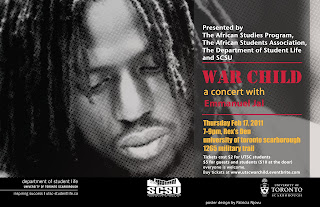 unbelievable struggles, Emmanuel managed to survive and emerge as a world-famous recording artist with a hit record under his belt. Called an artist "with the potential of a young Bob Marley" by Peter Gabriel, he has performed at Live 8 and Nelson Mandela's 90th birthday concert. His music can be heard in major motion pictures, TV, and he's been featured in major outlets like TIME, USA Today, NPR, CNN, MTV, & the BBC. Emmanual is also a spokesperson for Amnesty International and Oxfam, and created the charitable foundation, Gua Africa.

Emmanuel Jal has won worldwide acclaim for his unique style of hip hop with its message of peace and reconciliation born out of his experiences as a child soldier in Sudan. His music can be heard alongside Coldplay, Gorillaz, and Radiohead on the fundraising “War Child — Help a Day in the Life” album, as well as in three ER episodes, the National Geographic documentary God Grew Tired of Us, and in the feature film Blood Diamond starring Leonardo DiCaprio. Emmanuel spoke at TED Global, rang the bell at the NY Stock Exchange, and released his autobiography “War Child” all in 2009.

Despite his accomplishments in music, Jal's biggest passion is for Gua Africa. Besides building schools, the nonprofit provides scholarships for Sudanese war survivors in refugee camps, and sponsors education for children in the most deprived slum areas in Nairobi. For almost a year now, Jal has been eating one meal a day in his 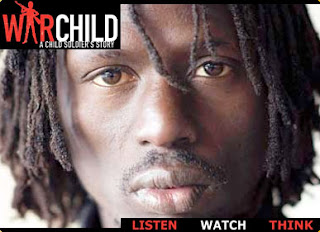 campaign to build a school in Leer, Southern Sudan, where Emma McCune - the British aid worker who adopted him and smuggled him to Kenya, taking him out of the life of a child soldier, and who subsequently passed away in a road accident - is resting.

He'll be at the U of T Scarborough Campus on February 17th for a concert.

• Get your Tix here.