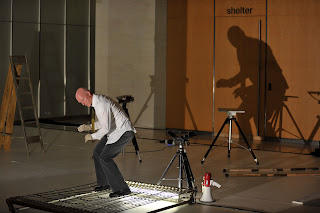 Taking place in and around a modular shack, Cabane follows the elegant Fortier, long renowned as a riveting soloist, and the mischievous Racine, as they turn everyday objects into impromptu instruments and generate a series of surreal encounters.

"A man dances a musical score of words and takes the measure of his territory while a musician (Racine) plays mesh-sprung box springs and, thanks to images created by Robert Morin, a vulture takes flight. Ordinary objects lose their conventional designation as a door, walls and windows open 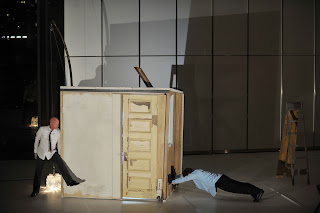 up to a surrealist world. The stage technicians are visible under the simplified lighting of John Munro. A gibe at technological overkill?" - Michèle Febvre, Associate Professor of the dance department at UQAM.

Premiered at the Festival TransAmériques in Montreal (2008), Cabane has toured Canada, Europe and to the Dance Umbrella Festival in London, UK.


Paul-André Fortier founded his company in 1979. His highly theatrical and rigorous style of choreography comments on the modern world and has had a significant impact on his peers and a whole new generation of choreographers. Fortier is the recipient of the prestigious Jean A. Chalmers Award for choreography as well as a Dora Mavor Moore Award for Outstanding New Choreography. From 2003 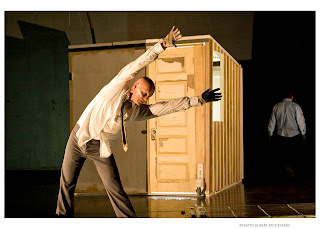 to 2007, Fortier was the resident choreographer at the Cinquième Salle at Place des Arts in Montreal. In 2010, he was appointed Chevalier in ordre des Arts et des Lettres by France. His career thus far has led him to work on over 40 choreographies in 30 years, presented in 10 different countries.

Rober Racine is a musician, writer, performer and drawing artist. Strangeness and poetry are seen throughout his work, which is dominated by excessiveness. He has published 3 novels: Le mal de Vienne, Là-bas, tout près and L'ombre de la Terre, for which he won the Prix Ringuet from the Académie des lettres du Québec. As a visual artist, his works have been shown in museums and galleries throughout Quebec and Canada, and as far away as the United States, Europe, Australia and Japan. In 2007, Racine received the prestigious Paul-Émile Borduas Award by the government of Quebec.